Trolling motors come in many different styles, sizes, and categories. If you’ve been using a trolling motor for any length of time, you may be getting frustrated with the manual stow and deploy features.

Are there any trolling motors that stow and deploy automatically?

Self-deploying trolling motors are still a relatively new idea, but there is one on the market that has been available for several years and has become a favorite with many anglers.

That trolling motor is the Minn Kota Ulterra.

As you’ll see throughout this article, the Ulterra takes the work out of deploying and stowing so you can spend more energy on catching fish.

You’ve come to the right place!

Keep reading to find out all you ever wanted to know about self-deploying trolling motors.

What are Self-Deploying Trolling Motors?

Most trolling motors have some sort of a latch that you either pull or step on to release.

This unlocks the trolling motor from its stowed position so you can lower the shaft and motor head into the water.

Some models are heavier than others, and some are easier to deploy than others.

But, by far, the easiest trolling motors to deploy are the ones that deploy themselves.

Self-deploying trolling motors, as you might imagine, are trolling motors that can be deployed automatically, without the use of manual knobs and latches.

There is currently only one self-deploying trolling motor on the market, and that’s Minn Kota’s Ulterra. 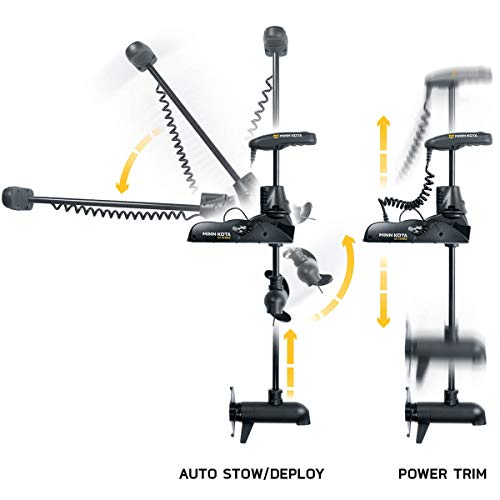 The Ulterra will deploy automatically at the push of a button on a wireless remote. In the future, other trolling motor manufacturers may follow this pattern in creating their own self-deploying motors.

Another potential self-deploy method that could be used is by adding an automatic deployment setting to hand tillers and foot control pedals. Again, though, this hasn’t been done yet.

The Lowrance Ghost, for example, has a cable that you pull to unlock the motor from its stowed position. Using hydraulic power, it then lowers itself into the water.

Some MotorGuides and Minn Kotas are also designed this way. The cables and hydraulics make stowing and deploying easier, but at the end of the day, some physical effort is still required–they do not stow and deploy fully automatically.

All of these motors, including the Ulterra, usually come with lots of additional high-tech features, such as GPS, autopilot, spot-lock and cruise control. Most are controlled wirelessly, while others have a foot control option.

In fact, getting back to the Ulterra, the only true self-deploying motor on the market has so many great ease-of-use features that it is sometimes referred to as the “lazy man’s trolling motor.”

Of course, that’s not to say that only “lazy men” will benefit from having a self-deploying trolling motor.

The Ulterra, and even some semi-automatic trolling motors, can be useful for a variety of boaters and anglers and a number of different situations.

What are the Benefits of Having a Self-Deploying Trolling Motor? 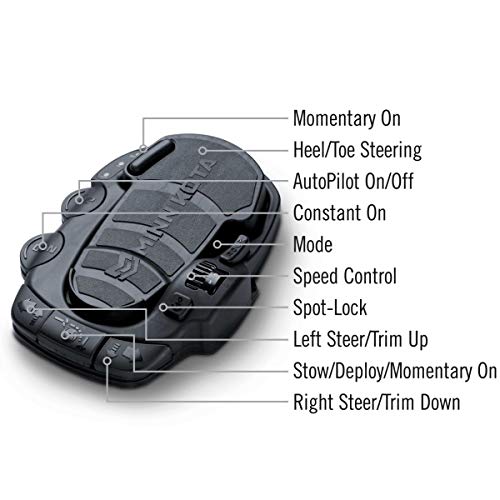 Self-deploying trolling motors do most of the work themselves, not just when it comes to deploying but also finding your way around the water.

If you struggle with the physical lifting involved with manually-deployed trolling motors, then you’ll see an obvious benefit of upgrading to an Ulterra. But there are other benefits as well.

Of course, it’s worth noting that self-deploying motors, even the semi-automatic ones, are going to be much more expensive than your average trolling motor. Are they worth the extra cost?

That depends on your particular needs and preferences.

If you have back issues or other health problems that make stowing and deploying your trolling motor difficult, then investing in a self-deploying motor may make your fishing trips more enjoyable.

If you’re a serious angler who’s always out on the water and you depend on having a quality, premium-grade trolling motor, then a self-deploying motor may be a worthy investment for you as well.

Ultimately, though, you’re the only one who can decide whether the Ulterra or a similar trolling motor is worth the extra money to you.

What Should You Look for When Buying a Self-Deploying Trolling Motor?

So, let’s say you’ve decided that you do want to upgrade to an Ulterra, or at least you’re seriously thinking about it. What are some things you should consider deciding which one to buy?

The Ulterra is fairly large and powerful–it provides between 80 and 112 pounds of thrust, with shaft lengths between 45 and 60 inches.

For this reason, it may be too powerful for smaller boats and is most likely to fit medium and larger boats.

To determine the right amount of thrust, figure that you’ll need about 2 pounds of thrust for every 100 pounds of boat (including gear and passengers).

For minimum shaft length, measure from the mounting surface to the waterline, then add 20 inches. 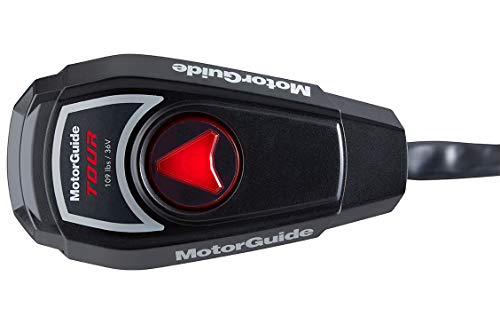 These numbers will give you a rough estimate of the size range you will need when purchasing your new trolling motor.

As mentioned above, the Ulterra self-deploys automatically at the push of a button on a remote. Semi-automatic trolling motors are usually deployed by pulling on a cable. 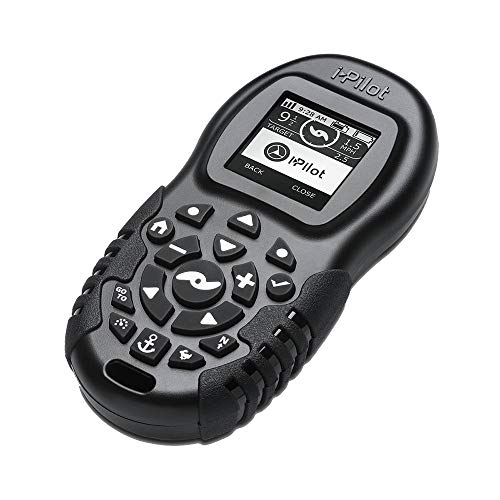 Either method will be sufficient for most people, but if you have a preference for pushing a button on a wireless remote, be sure to choose the Ulterra, as it is the only trolling motor that has this option.

Semi-automatic trolling motors won’t necessarily have the same features as the Ulterra, and vice versa. If you’re not sure which trolling motor you’re going to choose yet, but you want to make sure it has GPS, you’ll want to double-check that this is included with the trolling motor.

The same goes for other features as well. In the review below, we’ll take a look at Ulterra’s advanced features and compare them against the semi-automatic trolling motors that are available.

Top 3 Picks for You

Minn Kota’s Ulterra, as the name would seem to suggest, is the ultimate option in terms of self-deploying trolling motors.

This motor was the first, and so far is the only, to offer self-deployment. The motor comes packed with tons of additional features.

Minn Kota asserts that this motor is “the only trolling motor that can stow and deploy itself with the touch of a button”.

The button is found on a wireless touchscreen remote, which you can use to deploy and operate the motor from anywhere on the boat or even onshore.

The trolling motor provides 80 to 112 pounds of thrust and has 45-, 54-, and 60-inch shaft options, making it great for most medium-sized boats.

This trolling motor has a laundry list of high tech features, including:

The main drawback of this excellent product is that it shouldn’t be used in temperatures under 40 degrees F. Exposure to cold will cause some of the components to wear out faster.

Minn Kota Ulterra - How it works
Buy on Amazon

The Lowrance Ghost is known for being one of the quietest, yet most powerfully efficient trolling motors on the market.

This motor does not self-deploy completely, but the built-in hydraulic cable-pull system makes it easy to stow and deploy.

Simply pull the cable, and the hydraulic system will lower the shaft and motor head into the water.

This trolling motor’s features include:

This is a great motor for anyone who doesn’t need a fully self-deploying trolling motor but is still in the market for a premium option with great features.

Lowrance | Review of the GHOST Trolling Motor
Buy on Amazon

The MotorGuide Tour Pro is another advanced trolling motor for the serious angler. It has a 45-inch shaft and provides 82 pounds of thrust, so it will fit most medium-sized boats easily.

Though it isn’t a true self-deploying motor, it has what is called a “zero-gravity lift assist”.

To deploy the motor, you lift it up; it is extremely lightweight. The nitrogen gas spring causes the motor to bounce forward and lower itself smoothly into the water.

The Tour Pro’s features include:

This is an excellent motor that combines the quiet operation of a true cable steer motor with the high-tech sonar and GPS capabilities of the modern trolling motor.

While there are no other self-deploying trolling motors currently available, there are several that are much easier to deploy than the average trolling motor. These include the Lowrance Ghost and the Motorguide Tour Pro.

If you’re looking for an easier way to spend your days out on the water, why not consider investing in one of these trolling motors?