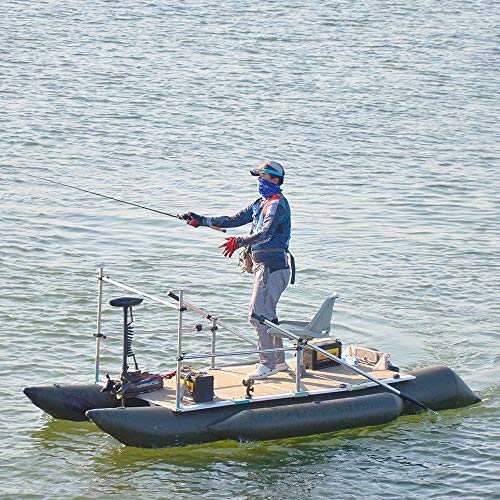 Are you interested in whether a person can stand up in an inflatable boat?

The answer may be more complex than you had anticipated. While it is entirely possible to stand up in an inflatable boat, it depends on the type of boat and the type of bottom you choose.

What Qualifies as an Inflatable Boat

An inflatable boat is any boat where the front (the bow) and the sides are made of an inflatable material. Note that the back (transom) of the boat may or may not inflate.

These boats are usually made of PVC, vinyl, or polyurethane and are less expensive than traditional boats. Different kinds of boats generally have different types of flooring possibilities.

There are several different types of inflatable boats that you could be dealing with.

These are a lot of fun but are not usually designed for hard use. Most are made to take the family out on the lake for a relaxed day in the sun.

The more robust and expensive versions can be used for whitewater rafting or fishing.

If you want to stand up in an inflatable boat, these are not the optimal choice. The bottom is usually inflated the same way the rest of the boat is. As such, standing on it is like trying to stand in a bounce house: possible, but not stable and not something you want to do for a long time.

These are popular with fishermen. They usually involve a seat suspended between two large, inflated tubes.

These boats are designed for sitting, not standing. They are highly maneuverable and particularly useful for people who like to fly fish. They are designed so that the fisherman can access everything he needs without having to stand up or get out of the boat.

These come in 1- and 2-person varieties and are designed for everything from fun times on the water to whitewater, long river trips, fishing, and more.

Given the very nature of a kayak, these inflatable boats are not designed for standing. Instead, the seats are developed in such a way that sitting for long periods is comfortable and does not cause pain.

Dinghies are designed for travel between larger boats or between large boats and the shore. As such, they are usually seaworthy and are generally more robust than the types of boats we have discussed so far.

Most dinghies permit standing, though the floor may be such that you only want to stand to enter and exit the boat. Some, however, have floors designed to be stood on for long periods.

These boats are a hybrid between regular boats and inflatables. The bow and sides may consist of an inflatable tube, but it is attached to a more traditional boat floor. They can be used for almost any purpose you can think of.

Sometimes, these boats are designed to come apart in several pieces. However, they never store as small as regular inflatable boats and they take longer to put back together, too.

The type of inflatable boat floor that you choose will depend on your needs, your budget, and your storage space.

These boat floors take up a minimal amount of space. They consist of a series of slats, usually made of aluminum or wood, connected by PVC or a similar material. There is usually a gap of a few inches between the slats.

When you want to use the floor, you can simply unroll it into the bottom of the boat. Roll it back up to store it.

These floors provide enough stability so that you can stand up to enter and exit the boat. You can also change positions once in it. However, you won’t want to move very often or spend too much time standing because it is not that stable.

ALEKO’s 8.4-foot inflatable boat is well-reviewed and uses this kind of floor. 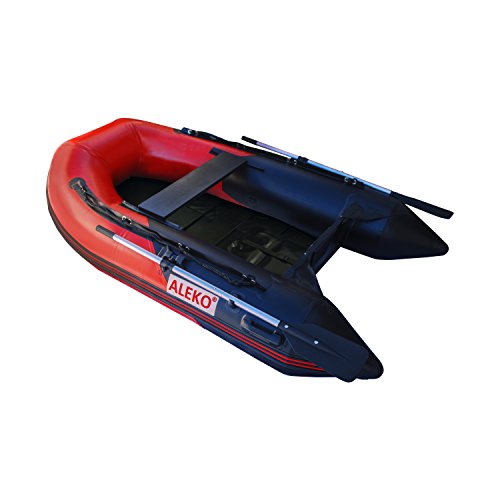 Inflatable floors, or air decks, provide more rigidity than you might think. People describe them as being like having an inflatable paddleboard in your boat, acting as the floor.

They are easy to store, too. Simply deflate the floor along with the rest of the boat and fold it or roll it up.

These offer more rigidity than slat floors while also allowing the boat to move with the water. They are also more comfortable for anyone kneeling or sitting on the bottom of the boat.

Most people find inflatable floors easy to stand on, though they may not be as stable as a traditional boat floor. This BRIS 9.8-foot Inflatable Boat is one example of a boat with an air deck that is easy to stand on. 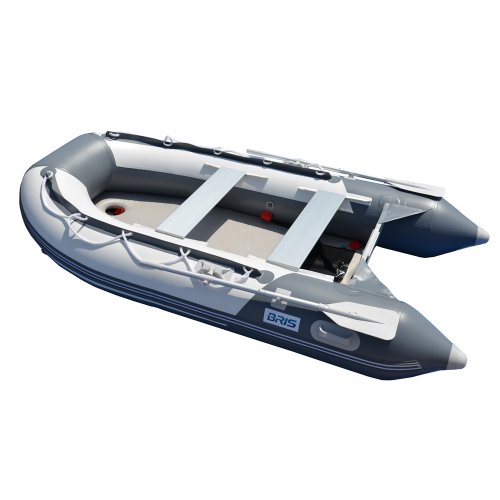 Hard floors for inflatable boats are most commonly made with aluminum or wood. Once in the boat, this floor acts as a backbone for the boat, giving it great stability and rigidity.

A hard floor for an inflatable boat usually comes in several rectangular pieces, which must be assembled and disassembled every time you want to put the boat together or take it apart.

They will need to be stored too, and may take up a larger footprint than the rest of the boat does, even when it is folded up.

However, these boats offer nearly optimal standing surfaces. Because they are so stable and rigid, standing on them feels like standing on a regular boat. The Killer Whale by Inflatable Sport Boats uses this type of floor and people love it! 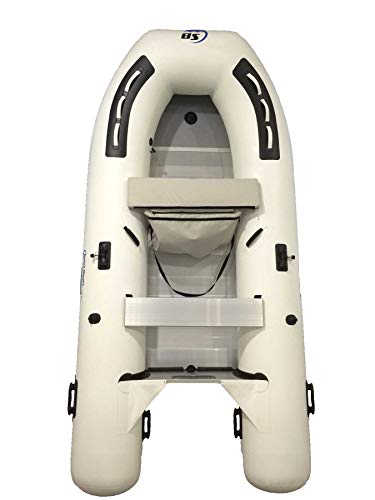 The floors of RIBs, as mentioned above, are nearly identical to the flooring in regular boats. Thus, they likely offer the easiest surface for standing among inflatable boat options.

Because RIBs have the same footprint as regular boats, they are not normally sold online by companies that would have to ship them to you. You can try one out at your local boat shop, though, and decide if this is the right option for you.

When it comes to standing on an inflatable boat, you have a lot of options. Look at how much money you want to spend and how you plan to store your boat, then decide which one would be best for you.

No matter what you want to use your inflatable boat for, there is an option available that allows you to stand up. Figure out what is best for you, then enjoy your time out on the water.