You’re enjoying a fantastic summer day on the water, taking in the sun and catching loads of fish. Then, your worst nightmare happens.

Maybe it dies while you’re attempting to start it up, or while you’re shifting from one gear to the next. Whatever the circumstances, you’re stranded out in the middle of the lake.

What caused this to happen? And what can you do to make sure it never happens again?

Keep reading as we dive into this topic.

Why Does My Outboard Motor Die When I Put It in Gear?

If your outboard motor is dying when you shift gears, it’s probably going to be an electrical problem, but there could be other factors at work as well.

This problem most commonly happens with two-stroke motors, though it can happen with four-stroke motors as well. In either case, it usually indicates a problem with a cylinder.

If not all the cylinders are firing, the engine’s RPMs will drop too low, causing the motor to simply die because it isn’t turning enough to keep the engine running.

This problem most commonly happens with two-stroke motors because they have only two cylinders; if one spark plug goes out, the other cylinder will be carrying the entire load all on its own.

That said, it occasionally happens with four-stroke engines too, as they are not made to run on only three cylinders.

With both two- and four-strokes, it won’t happen as much with modern computerized engines. This is because the internal computer can monitor the RPMs and adjust fuel levels if necessary to get the levels back up to where they should be, even if one cylinder isn’t firing.

This problem will need to be fixed, of course, but this at least keeps your engine from dying while you’re out on the water.

Why Does My Outboard Motor Die When I Shift the Gear?

Most engines naturally drop their RPMs when shifting gears. This is due to a shift cutoff switch or some similar type of programming within the motor.

This setting reduces the wear and tear on some of the engine’s components, but it can cause problems by allowing the motor to die when shifting gears if not all cylinders are firing properly.

Dropping the number of RPMs is necessary to prevent parts of the motor from being damaged or destroyed when shifting from forward to reverse.

But, if not all cylinders are firing, the RPMs may drop too low when performing this shift, and if they drop too low, this will kill the engine.

Though electrical problems are the most common cause of an engine cutting out, there may be other causes as well. Some of these include:

If the fuel isn’t being properly pumped through the engine, the engine could die, especially when you try to shift gears. This is because shifting gears requires an extra burst of fuel that may not get to the right place if the fuel pump is damaged or dirty.

A leak in one of the fuel lines may cause fuel to leak out or too much air to get into the system.

Since you need the proper mix of air and fuel for combustion, a fuel leak will likely lead to an imbalance. Either too much fuel is leaking out to provide the necessary spark, or too much air is getting in and preventing the spark from happening in the first place.

What’s more, a leak in a fuel line could allow dirt, dust, and other debris inside the fuel system, which in turn could clog up other components and lead to further engine issues.

Your problem could be as simple as needing to add fuel to your gas tank.

Whenever a fuel tank is getting low, the engine may begin to sputter and struggle, particularly when shifting gears. Once the fuel level gets low enough, the engine will simply die.

It is such a simple solution that this is one of the first things you should check for when your engine dies while shifting gears. Check the fuel tank and see if you have run out of fuel. If so, fill up the tank and see if that corrects the problem.

Carburetor issues are another common cause when it comes to having your engine cut out.

As mentioned above, too much air or too much fuel in the system will cause the motor to die and may lead to starting issues if you try to get it running again.

If your motor dies while shifting gears or you have trouble getting it to start in the first place, you may have an issue with your carburetor.

Your tachometer, which controls your idle RPMs, may be responsible for a motor that cuts out.

Refer to your owner’s manual to find out how to check the tachometer of your specific engine, or check out this article.

If you don’t already have a tachometer, installing one will allow you to check your idle RPMs if you begin having issues with the motor dying. To find out how to install a tachometer, check out this video.

Installing and calibrating an outboard tachometer

If you have trouble shifting into idle, or if your motor dies when you shift into gear after idling for a period of time, your issue may be related to low idle RPMs.

There are a multitude of issues that can cause your outboard motor to die while shifting gear. Some of the most common issues have been outlined above.

If nothing you do seems to fix the problem, your best bet is to take your motor to a small engine mechanic. They can perform advanced diagnostic testing and check for other less common issues as well.

There are several things you can do to try and pinpoint what is causing your motor to die.

If you suspect an electrical issue, start by doing a compression test; this will show if there’s a problem with a specific cylinder or with the engine overall. Compression test kits are available online and can also be found at your local auto parts store. 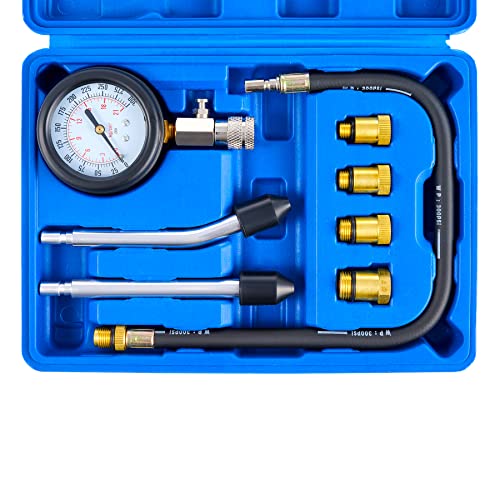 Test each cylinder of the engine according to package directions. Here’s a great visual on the process:

How to Compression Test an Outboard Motor | BoatUS

If you have one cylinder showing 90 and the other showing 130, you may have a problem with one of the cylinders even though both readings are technically within the normal range–in other words, a large gap can signal problems.

If you have a four-stroke motor, the tester should read between 160 and 220 for each cylinder. Again, the readings should be fairly similar for each cylinder–if three of them are reading around 200 and one is reading at 160, you may have a problem.

To test each individual cylinder without a compression tester, use rubber-coated pliers to remove each spark plug one at a time with the engine running.

Listen for any strange sounds and changes to the motor as you remove them. Reinstall each spark plug after removing and listening.

If any of them sound different from the others, or if removing one doesn’t produce a change at all, you may have found the problem.

Swap out the spark plug in question for a plug from one of the other cylinders and see if the problem changes to that cylinder. If so, you’ve found the plug that needs to be replaced.

Do a spark test to make sure the issue is not electrical. Change out the problematic spark plug if necessary, replacing it with a new one or with one that is working properly.

How to test for spark on ANY engine - Easy ✔

If the engine is still not sparking, there could be an ignition coil problem.

It’s also a good idea to check for “whitewashed” plugs. These spark plugs have a buildup of chalky whitish gunk on them. This buildup means too much fuel is flooding the cylinder and not allowing enough airflow.

Air is necessary to combust the fuel, so if there is too much fuel and not enough air, the engine won’t start. This is a fuel problem rather than a spark plug issue.

Check for black spark plugs as well. Black plugs are a sign of carbon build-up, which is another type of fuel problem caused by improper fuel mixing or a wrongly-adjusted carburetor.

To fix this problem, you’ll need to clean the plugs or get the carburetor properly adjusted.

Brown plugs are usually a good thing, but if one appears to have more buildup than the others, this may indicate a corroded or improperly firing plug.

In this case, clean the spark plug. It may need to be replaced if it’s too worn out or won’t clean up well.

Your outboard motor may die when shifting gears if not all cylinders are firing correctly.

This is because the engine won’t be generating enough RPMs to keep the motor running, so it will sputter and die.

The root problem may be related to a bad spark plug, ignition coil problem, or even a fuel problem.

There are several tests you can perform yourself to determine the problem; for this reason, it’s a good idea to keep extra spark plugs and tools on the boat with you in case your motor dies while you’re out on the water.