If you’re new to using rechargeable batteries, you may think you can stick them on the charger and leave them. But did you know that doing this can actually cause some serious problems with your battery?

Unless you have a smart charger to monitor your battery’s charging progress, you run the risk of overcharging your battery. And overcharging a marine battery can not only leave you looking for a new battery but may even cause more serious hazards to your health and safety.

So, how do you keep from overcharging your batteries? How long is it safe to leave a battery on the charger? What is the best way to charge a marine battery?

Can You Overcharge a Marine Battery?

Rechargeable batteries spend a lot of time on the charger, especially if you use them frequently. But, though charging is necessary, is it possible to charge your batteries too much?

It is not only possible but also quite easy to overcharge a marine battery.

Some marine batteries have built-in battery management systems that prevent over and undercharging, and some chargers turn off automatically when a battery is fully charged.

But if you don’t have this type of battery or charger, or if either system malfunctions, you run the risk of overcharging your battery.

There are a couple of ways you can overcharge a battery. These include:

Both leaving on the charger too long and charging at high voltage will cause similar problems with your battery. What sort of problems, you ask?

What Happens if You Overcharge a Marine Battery?

Overcharging your marine batteries can cause several problems, including:

How Long Can You Leave a Marine Battery on a Charger?

So, we’ve established that you don’t want to overcharge your marine batteries. But this begs an obvious question: how long can you leave a battery on the charger without risking an overcharge?

The answer varies, but it largely depends on the type of charger you have.

Onboard chargers  are left permanently hooked up to your batteries. These types of chargers are usually known as “smart chargers;” they charge automatically and have a built-in sensor telling the charger when to stop supplying a flow of energy.

Smart chargers will sense the charge level at all times and stop charging when the battery’s full. There are different kinds of smart chargers, and not all of them are meant for onboard use, so make sure you know what you need and what you’re getting when you buy a new one.

Other types of chargers will not sense a full charge, so you’ll have to keep an eye on the progress of your charging batteries to know when they’re done.

In general, it typically takes at least 4 to 6 hours to recharge a marine deep cycle battery, but multiple factors can influence this number, including:

You can estimate how long it will take to charge your battery using the following formula, courtesy of Powering Autos:

What is the Best Way to Charge a Marine Battery? 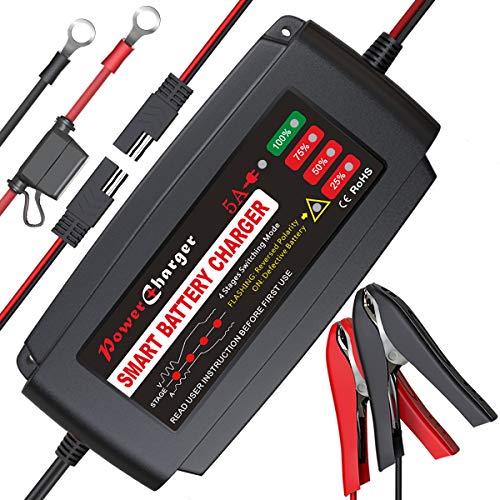 There is no “one right way” to recharge your marine batteries. The type of charger you choose will depend on the type of battery you have and your setup.

Regardless of your setup, it is generally best to use a smart charger that can sense the charge current and adjust it to your particular battery. Smart chargers will turn themselves off automatically when the battery is charged, preventing overcharging and other electrical issues.

It’s also a good idea to use a charger that’s recommended for your specific battery. Some batteries are only meant to be used with certain chargers. Before purchasing a battery or a charger, find out what type of charger is recommended for any battery you’re considering.

Overcharging a marine battery can cause many serious problems, including poor performance, irreparable damage, and even the risk of fire and explosion. To prevent these issues, it’s a good idea to use a smart charger or to monitor your batteries closely during the charging process.

Thank you. I found your topics and instructions quite valuable.