If you know anything about electricity, then you probably know that circuit breakers are an essential safety component to any electrical system.

But what about electrical systems generated by batteries?

In this article, you’ll learn what you need to know about how to attach a circuit breaker to a marine battery and why this is an important safety step when setting up your boat’s electrical system.

Ready to dive in?

What Is a Marine Battery Circuit Breaker? 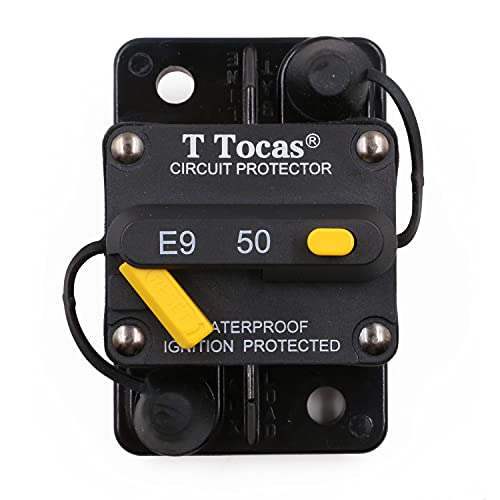 Functionally, it works the same as any other type of circuit breaker, though it will also be waterproof and specifically designed for outdoor use.

A marine battery circuit breaker looks like a little box, typically small enough to fit comfortably in your hand. Like other types of circuit breakers, it is designed to break up the flow of current from your battery for safety reasons.

If something hooked up to your marine battery is drawing too much current, this extra rush of heat and electricity can cause a fire, or it may melt or cause other damage to equipment. The purpose of your circuit breaker is to disrupt this excess current, causing the power flow to fail.

Circuit breakers are primarily intended to open when there is an overflow of current, but before the current gets hot enough to damage wiring or equipment.

Fuses work in a similar way, but they are destroyed every time they blow, so they have to be replaced. When a circuit breaker is tripped, it simply has a switch flipped and needs to be reset — some even reset themselves automatically.

Circuit breakers can be used again and again.

If you have a circuit breaker , it will break the current flow, killing power temporarily but preventing damage to the battery and trolling motor.

You can, of course, reset the circuit breaker so that current flow will be restored; and in this case, it would be best to set the trolling motor at a lower power setting or turn off the fishfinder to prevent further issues.

How Does a Marine Battery Circuit Breaker Work?

Marine battery circuit breakers work like any other type of circuit breaker — by disrupting the flow of current in an electrical circuit when the current becomes too hot or too strong for the cords and devices it is passing through.

Marine battery circuit breakers look like small electronic boxes with plugs, switches, and terminals. The terminals can be connected via battery cables to your marine battery.

This prevents the wires and other components of the circuit from overheating, melting, and potentially causing a fire.

It’s important to find out the appropriate amp capacity for your boat, battery, and all devices hooked up to the battery. Your circuit breaker will need to allow the proper amount of current to pass through without allowing anything to become overheated or overwhelmed with the current.

For more detailed information on how circuit breakers work in general, check out this article from HowStuffWorks.

How Do You Attach a Circuit Breaker to a Marine Battery?

Putting a circuit breaker on your marine battery is a fairly simple process.

If you haven’t done a lot of wiring before, it may be a good idea to check out a tutorial video like the following one to get a good visual before starting:

If you have marine batteries on your boat, then attaching circuit breakers to them is an important safety measure. These small electrical boxes can prevent major electrical problems such as fires, overheating wires, and other damage to devices.

Mounting a circuit breaker on your battery is fairly easy. If you’ve never done it before, check out the video and follow the steps outlined above.

With any luck, you’ll have the breaker installed in no time so that you can get back out on the water!