Perhaps you’ve heard about the high-tech features paired with the classic design in Minn Kota’s Ultrex model, and you’re wondering how they compare to the similar-sounding Fortrex model.

Which one of these trolling motors is bigger, better, fancier? Which one gets the job done best?

In this article, we’ll compare the Ultrex and Fortrex side by side and consider the pros and cons of each.

Ready to get started?

As you can see from the table above, Minn Kota’s Ultrex and Fortrex models have some definite similarities. But there are also quite a few notable differences.

Basically, the Ultrex is a cable/ electric hybrid: it has the smooth, quiet power of a cable steer trolling motor with the high-tech features more of an electric steer. It is the “best of both worlds,” and it is the only trolling motor of its kind.

The Fortrex, on the other hand, is a heavy-duty cable steer trolling motor. Its quiet, powerful motor can haul even the largest boats through both clear and heavily vegetated water. Because of its size and power, it has been described as a “Clydesdale” trolling motor.

Let’s take a closer look at some of the properties of these trolling motors. We’ll consider the power, size, design, and special features of each and compare them side to side against each other.

When you’re looking for a new trolling motor, you want to consider how much power you need for your boat size and average load. It’s important to select a trolling motor that produces enough power for your boat without wasting precious battery life.

Let’s look at the power capabilities for the Ultrex and the Fortrex. 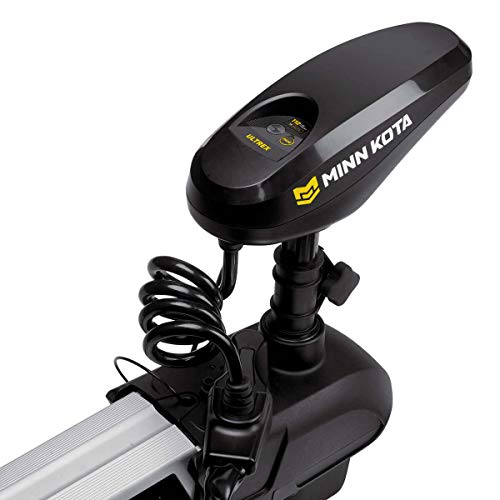 The Ultrex comes in two thrust capacities: 80 pounds and 112 pounds. This makes the Ultrex a great choice for both medium and large boats.

The 112-pound option requires 36 volts of battery power. It is a great option for boats up to 25 feet long and weighing up to 5,000 pounds fully loaded. 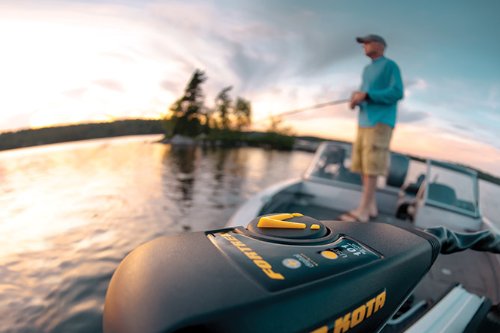 The Fortrex also comes in 80- and 112-pound thrust capacities. The 112-pound option isn’t as widely available as the 80-pound option, but for those with large boats or heavy loads, it is one of the best motors on the market for getting you from point A to point B.

The Fortrex has the same maximum boat lengths and weight capacities as the Ultrex, so both trolling motors are equal in this category.

Similar to making choices about power, you’ll want to think about the size of the trolling motor you need. Specifically, you’ll want to know the appropriate shaft length, and you’ll probably want to have some idea about the weight as well.

Let’s consider the size measurements of the Ultrex and the Fortrex. 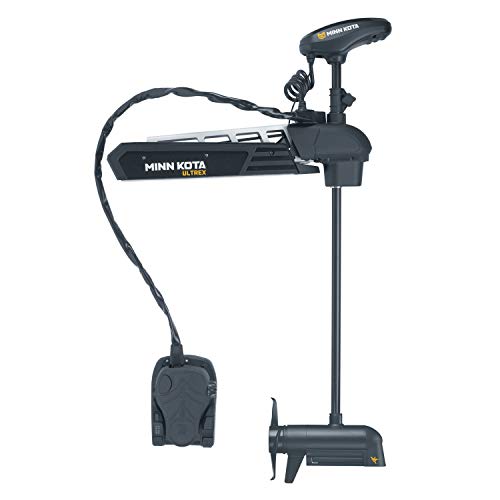 The Ultrex is a heavy motor. According to Minn Kota, the unit weighs between 77 and 91 pounds depending on the size you get. 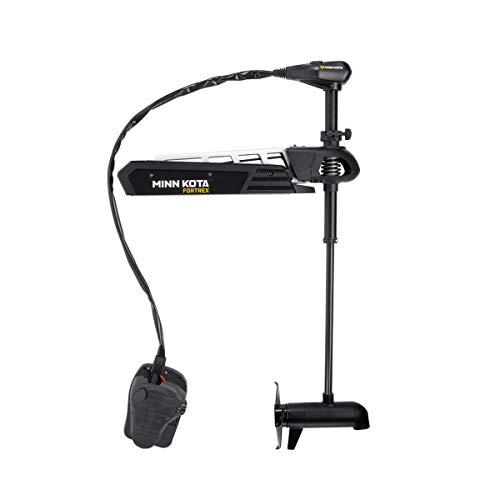 The Fortrex also has shaft lengths available in 45 and 52 inches, with the Riptide Fortrex model also available in a 62-inch shaft length. The 62-inch option is great for taller boats with 28 inches or more from the bow to the waterline.

The shipping weight for the 80-pound-thrust Fortrex is listed on Glenn’s Reel and Rod Repair as being 80 pounds. There is little other information available on the weight of the Fortrex, but it appears to be roughly the same as the Ultrex in that regard.

Despite their similarity in size, with the 62-inch shaft option, the Fortrex has a slight edge over the Ultrex.

It’s also important to find out about how a trolling motor is designed. Some are made with better, more useful, or more convenient design features than others, and even a small difference in design can make a huge difference when it comes to actually use the motor out on the water.

Let’s compare the design features of the Ultrex and the Fortrex and discuss the similarities and differences. 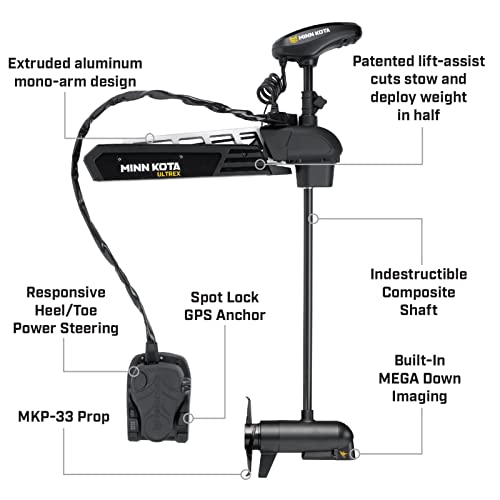 The Ultrex is designed with a Lift Assist mount which makes stowing and deploying the heavy motor a little easier.

The Ultrex also comes with Minn Kota’s Digital Maximizer technology, which allows you to customize your speed and conserve your battery.

The motor can be controlled either by foot pedal or wireless remote, which makes it super convenient for those who want to operate the trolling motor from anywhere in the boat (or even from the shore).

Everything from the mount to the shaft to the motorhead is built to last, and the overall design is very similar to the Fortrex.

The Fortrex also comes with the Lift Assist and Digital Maximizer functions. It is well-built with durable aluminum and composite materials, so it will last you season after season.

The Fortrex doesn’t have a wireless remote control option, as it is operated solely via a foot pedal. That said, it has a few other design features which the Ultrex does not have. 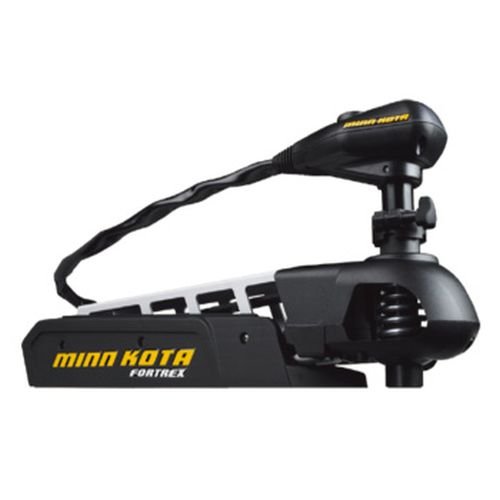 Firstly, the Fortrex comes with a Bowguard mount, which allows the shaft to break away on impact before resetting itself automatically. This greatly reduces the chance of damage even from severe impacts.

Another significant design difference is the “Mono-Arm” mount design, which is made of one-piece aluminum that allows the motor to run exceptionally quiet by reducing rattling and clunking noises.

As noted above, these two trolling motors have some unique and distinctive features that not only set them apart from each other but from other trolling motors as well. These features can aid in a number of things, such as speed, navigation, safety, and ease of use.

Let’s consider some of the feature similarities and differences between the Ultrex and the Fortrex and discuss how these features make them unique. 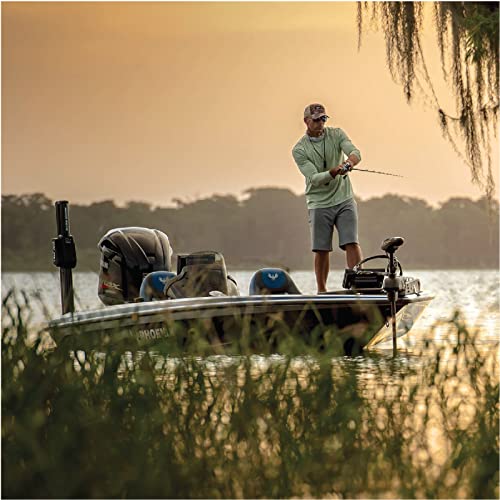 The Ultrex is a classic cable-steer motor with all the bells and whistles of a modern electric-steer. It comes with plenty of features that are not included with the Fortrex, including:

The Fortrex has a few features of its own, but there are very few ways in which it can compete with the Ultrex in this category.

The only special feature the Fortrex has that the Ultrex does not is a lighted directional arrow, which allows you to see at a glance which direction you’re heading, even after dark. 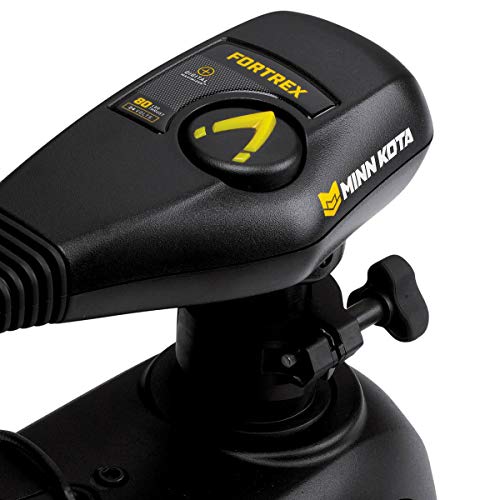 Our overall winner is the Minn Kota Fortrex.

Though the Ultrex is a fantastic trolling motor with lots of high-tech features, the Fortrex represents a powerful and well-designed motor that will work for the greatest number of users. It will fit more boats of various heights, is simple and easy to use, and costs less than the Ultrex.

Hopefully, after reading this article, you’ll have a better understanding of the differences and similarities between the Ultrex and the Fortrex. Best of luck as you shop for your new trolling motor!