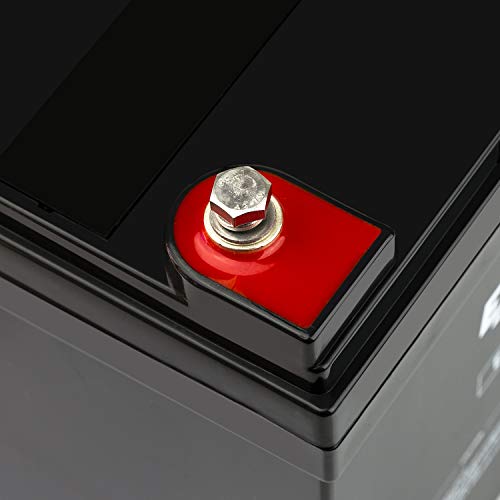 Whether you’re using a trolling motor or outboard engine, a marine battery is critical to ensuring your boat runs smoothly in the waters.

If you’re new to marine batteries, the process of finding the right terminals for replacement can be quite complicated. There are a number of reasons you may be looking to replace battery terminals.

Sometimes it’s a problem with the vehicle’s existing wiring, while other times, it’s an issue with the battery itself. Perhaps the terminals have been damaged, corroded, or not delivering the connections you need.

We’re here to simplify what deep cycle battery terminals are and what sizes you’ll need for your battery.

What Are Marine Battery Terminals?

Marine battery terminals are electrical contacts used to connect your charger to the deep cycle battery.

These terminals typically have dual posts; a positive and negative threaded post along with a pair of SAE tapered posts.

Worn or corroded battery terminals could be the source of battery or engine problems. Bad terminals lead to poor connections, resulting in a heavy electrical arc that destroys the battery post.

If the marine battery is outgassing, the arc could cause the battery to explode.

Furthermore, never use temporary terminals for permanent use. They tend to corrode and fail quickly, meaning they should only be used for emergency use.

Always replace the terminal if you notice any signs of wearing.

What Size Terminals Are on Deep Cycle Batteries?

Other car battery posts will usually come in 10 mm, 11 mm, or 13 mm. These sizes aren’t the same as deep cycle batteries when converted to inches.

What Are the Sizes of Other Battery Posts?

Here’s a table comparing the sizes of various battery terminals. This gives you an idea of which terminals can be used based on your battery cables.

Below, we’ll discuss common battery terminals and how they can be used:

Auto Post Terminal (SAE Terminal): Auto post terminals are typically used for most car batteries. Anybody who has replaced a car battery will probably recognize it.

Stud Terminal: These terminals are designed to easily fasten and secure the terminal connection to the lug and lead base of the terminal.

Marine Terminal (Dual Post Terminal): A marine terminal features an automotive post and a stud terminal. The connection can be made using a ring terminal and wing nut or traditional pressure contact.

Button Terminal (Insert Terminal): These terminals are between M5 to M8. This refers to the metric size of the bolt thread’s diameter. The button terminals are frequently used for AGM batteries .

AT Terminal (Dual SAE/Stud Type Terminals): These terminals are frequently used on traction-type batteries for heavy cycling applications. This type of terminal has an automotive post and stud like the marine terminals.

How to Replace Battery Terminal Connector

Whether you’re using a marine battery terminal or a car battery post, make sure to use a proper terminal lug  that matches the size of your battery cables.

Then connect the battery cables to their terminals.

Next, attach this assembly to the battery.

When installing the battery terminals and cables, it’s recommended to use only high-quality crimping and stripping tools.

How To: Replace a Boat Battery

When you’re replacing your boat batteries, you’ll need to clean and connect the terminals properly.

Follow the steps below to replace your old marine battery with a new one.

Boat batteries can suffer from performance issues, which poor battery cable connections may cause.

Always refer to the battery manufacturer’s recommendations for proper connection and maintenance. Depending on the type of terminals used, you’ll need the proper lock washers and stainless steel nuts.

Most terminals will require you to position the lock washer between the connector and the nut. Then apply the recommended torque to compress the lock washer without damaging the lead terminal.

Battery terminals should be cleaned regularly using a wire brush  and a cleaning solution of baking soda  and water. This helps to neutralize any residue of electrolytes that may be left on the surface.

Never apply lubricants or grease between the connectors and terminals, since it disrupts the connection.

Always examine the cables to see if they show any signs of corrosion or damage. Try giving the cable a good tug to see if the connections are weak.

Any indication of corrosion, melted insulation, or acid leaks means you should replace the terminal.

Marine battery terminals are designed to resist corrosion and provide a secure connection to the batteries.

This ensures you’re receiving maximum energy capacity and a great performance from your battery.

As a result, you can enjoy boating or fishing for a long time without worrying about battery failures or poor connections.

Now you’re ready to replace your battery terminals and get out in the waters!