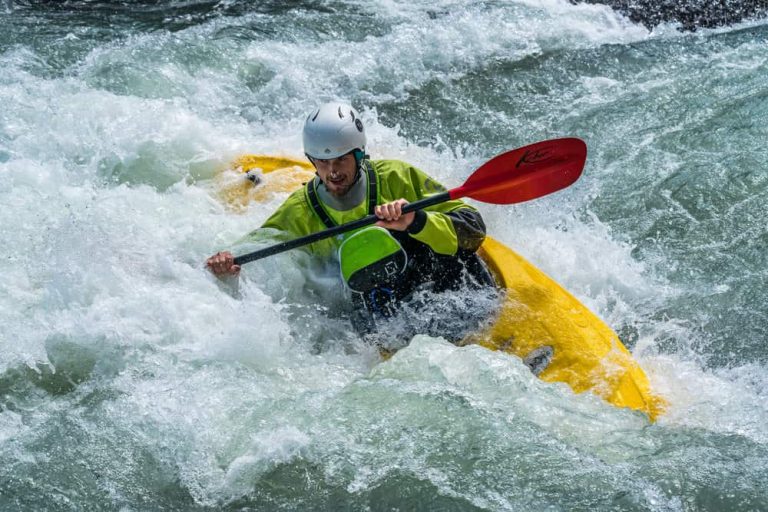 There’s not much more you can ask for from an inflatable kayak.

But there’s one BIG concern every first-time buyer has…

How can an inflatable kayak possibly be safe enough for whitewater rapids with sharp rocks? Won’t one small hit blow the kayak up?

Inflatable kayaks are 100% safe. Heck, they’re even safer than hard-shell kayaks in some ways.

A lot of people have this idea that inflatable kayaks are some sort of pool toy.

But that’s FAR from the truth.

Plus, I’ll also throw in some of the precautions you need to be aware of.

Too many people have this misconception:

Nothing can be further from the truth.

Too many people are afraid of things they don’t know.

To help you out, here are three safety features you probably didn’t know inflatable kayaks had:

Before I proceed, take note that some of these only apply to high-quality inflatable kayaks – not any cheap one you find.

Everyone knows kayaks are narrow.

If a wave hits you from a slightly wrong angle – or if you put a tad too much weight on one side – you’ll find yourself upside down.

But not with inflatable kayaks.

Inflatable kayaks are wider than traditional ones. They also have thick tubes which makes them super stable and extremely difficult to overturn.

You’ll need a giant wave to get this thing to flip.

And, if you’ve somehow capsized, getting back on your inflatable kayak will be super easy.

Even if you put most of your weight on one side while trying to get up, it won’t flip on you.

Note: ALWAYS wear your life vest. Even if capsizing is rare, it’s always good to be prepared.

WIth a high-quality inflatable kayak, you NEVER have to be.

For one, inflatable kayaks are incredibly buoyant. Even if you fill them up with water, they’ll stay right up on the surface.

But that’s not all. No, most hard-shell kayaks are too lightweight to go under anyway.

This means that any water that comes in, it’ll drain right out. These self-bailing systems ensure that your boat never fills up with water.

What about punctures? Won’t that make your inflatable kayak sink?

Well, unless you get several severe punctures all around, your kayak will stay afloat.

This is because good inflatable kayaks have multiple air chambers.

Should one get a puncture (which is rare), the other chambers will hold the boat afloat.

Now, this doesn’t mean that you can load anything into your inflatable kayak and expect it to hold up.There are weight limits, stay below them.

When you’re careful, sinking your inflatable kayak is the last thing you have to worry about.

Rocks are one of the most dangerous elements of river kayaking.

Those solid, sharp, rocks that protrude (or hide beneath) the water can be devastating to hit.

But with a good inflatable kayak… you don’t need to fear these.

Unlike solid kayaks – where a big hit can crack your hull – inflatable kayaks bounce off rocks. A heavy hit will do nothing save leave some scratch marks.

What more could you ask for?

Inflatable Kayak Precautions – 3 Things You Need to Keep in Mind

By now, your fears with inflatable kayaks should all but vanish.

However, as safe as inflatable kayaks are… they’re not perfect.

Professionals stick to hard-shell kayaks for a number of reasons – a few of them related to safety.

1. Inflatable Kayaks Are TOO Lightweight

For convenience, this is incredible.

The point is, any strong current or wind is going to throw your kayak around.

You’ll have to work twice as hard if you’re going against these elements.

There are rare occasions when you need speed.

Perhaps a boat is passing by, or a big log is hurling downstream.

Whatever the case, you need to get out of the way immediately.

Thick inflatable tubes are super buoyant, but they also create a lot of drag. Rowing an inflatable kayak is considerably slower than rowing a hard-shell one.

If you’re already caught in a strong current or fierce wind, this slowness will make your plight even worse.

That said, getting into these situations is rare, so it’s not too much of a big deal.

In the same light, inflatable kayaks are also more difficult to maneuver.

Because of the lightweight and thick inflatable tubes, you can’t row in a completely straight line. Every stroke of your oar will push you to one side.

This isn’t too much of a problem. But if ever you’re in a tricky situation where you need to keep as straight as an arrow, you’ll have a hard time doing this.

That said, high-end inflatable kayaks are changing the game.

Hyper-modern inflatable kayaks, such as the Sea Eagle Razorlight use drop-stitch technology to combat these problems.

Instead of the thick, round tubes, Razorlight has thin, square ones. It’s almost as if you’re riding a hard-shell… except you can enjoy all the convenience features of an inflatable kayak.

Should You Get an Inflatable Kayak?

Are inflatable kayaks better than hard-shelled ones?

But if safety concerns are holding you back from buying an inflatable kayak… throw those away NOW!

Inflatable kayaks are one of the safest boats you can get on.

Good ones can even handle whitewater rapids without a scratch!