It’s completely safe to go kayak surfing with these… but only if you have the right kayak.

Not all kayaks can handle saltwater and rough waves – but there are some that are specifically made for these adrenaline-pumping adventures.

How do you spot one?

It’s easy. All you need to look for are the 6 seaworthy features.

With these 6 things, you can take on the ocean without any fear.

Plus, I’ll also throw in my top 3 inflatable kayaks for ocean and sea use.

IN A HURRY, HERE’S OUR TOP PICKS… 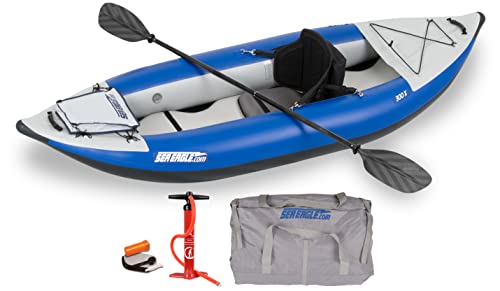 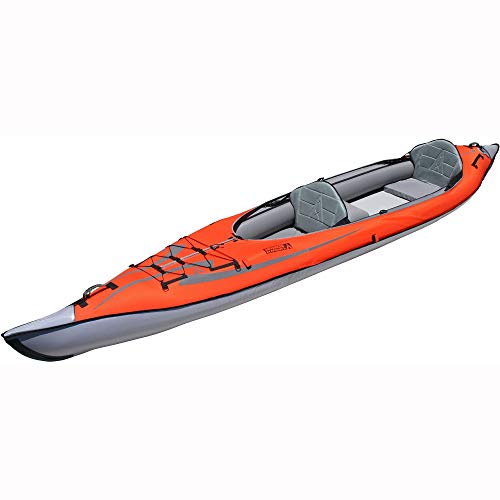 The ocean is awesome. It’s beautiful, powerful, and dangerous – perfect for thrill-seekers.

If you’re tired of calm lakes and want to hit the waves with an inflatable kayak, look for these 6 things first: 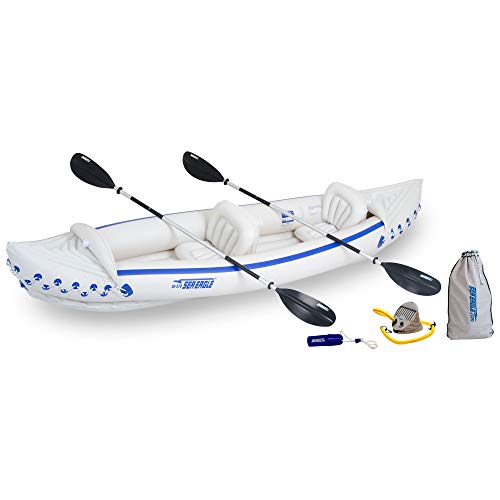 As the waves toss and turn you around, the last thing you want is to capsize.

That’s why your inflatable kayak should be both long and fat.

No, not as wide (fat) as an inflatable boat – but you’ll want something that’s wide enough to resist turning over.

Wider inflatable kayaks are a lot more stable than narrow ones. When waves hit them from the sides, they don’t capsize easily.

Check this video to see what a capsizing-resistant kayak looks like:

As for length, the longer the kayak the better.

Hitting a big wave head-on is enough to flip a short kayak over. A long, solid inflatable kayak, however, can ride these waves.

When the waves get rough, water is SURE to get in your kayak.

This is not only uncomfortable, but it can also weigh your kayak down and make it difficult to paddle.

That’s why you need a kayak with a self-bailing system.

Self-bailing kayaks have little slits around the floor. With this, any water that gets in your boat drains right out.

These holes are usually small and very well-placed, water won’t come in through them. 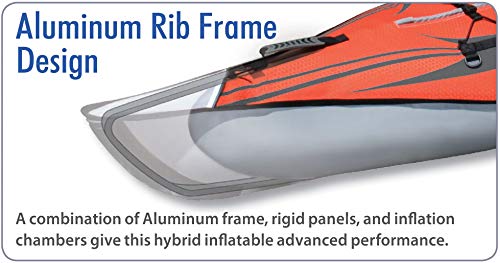 The longer the inflatable kayak, the easier it is to bend.

If your kayak isn’t solid, you won’t ride the waves – the waves will crush you.

That’s why having a solid-floor kayak is so important.

With solid flooring, it’ll hold the entire kayak intact over every wave. Your kayak will keep its optimal shape when things get rough.

Plus, solid floor kayaks are more comfortable and allow you to stand up without feeling wobbly.

Excuse the strange word, but you really want your inflatable kayak to be easy to grab.

If you’re taking on rough water, there’s a big chance you’ll get thrown off your kayak.

When you fall off, it’s very important to get to your kayak ASAP.

If you don’t, the waves will take your kayak farther and farther away.

That’s why you need a grabbable inflatable kayak.

Features like grab handles or lacing cords make it easy for you to seize your kayak before it floats away. They also allow you to hold on to your kayak when the waves crash upon you.

A completely smooth kayak will be very difficult to grab. And don’t get me started on trying to right it and get on top.

One KEY feature of a seaworthy inflatable kayak is a skeg. 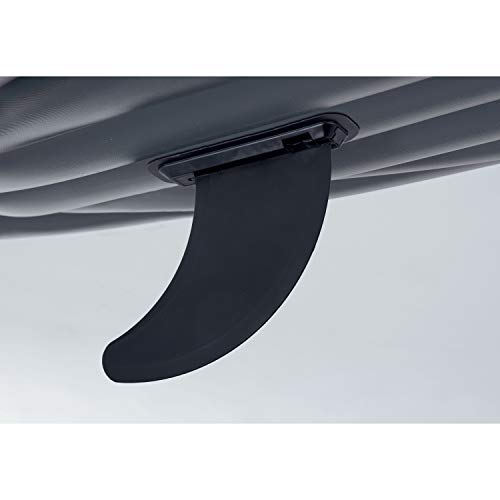 Skegs are small fins on the bottom of inflatable kayaks. They keep the kayak moving in a straight line.

One problem inflatable kayaks have is that they turn from side to side as you row. In wavy waters, this will get drastically worse.

But with a skeg in place, you can get to where you want to go with ease.

Last but not least, you want a kayak that can take a beating.

Cheap, one-layer vinyl kayaks won’t do. You need either a tough PVC/Hypalon kayak or a fabric-wrapped one.

Both of these are puncture-proof. Even if you slam against rocks, they’ll escape with barely a scratch.

The LAST thing you want when you’re out on the sea is a puncture. Sure, good kayaks have multiple air chambers to keep you afloat. But getting back to shore will be a real struggle.

The 3 Best Inflatable Kayaks for Sea and Ocean Use

With those 6 things, you’ll get yourself an ocean-ready kayak every time.

Still don’t know what to buy?

Here are my top inflatable kayaks for sea and ocean use:

If there’s one brand you need to know about, it’s Sea Eagle.

Sea Eagle produces the strongest, most convenient, and most innovative inflatable kayaks in the market.

Their Explorer line-up is one of the best in the inflatable kayak world.

It has everything you want for a seaworthy kayak.

Extremely stable? Check! With its length and thick tubes, waves can’t toss this boat around.

Easy to grab? Check! With grab handles and lacing cords, you can easily hold on when things go wrong.

Easy to navigate? Check! With a removable skeg underneath, you can say goodbye to wobbly paddling.

Super strong? Check! Made from 1,000-denier reinforced PVC, this is as tough as you can get with inflatable boats.

It also comes with

What more could you ask for?

Want more space? The Explorer comes in 4 different sizes, fitting up to 3 adults.

Another top-notch inflatable kayak is Advanced Elements’ AdvanceFrame Elite. It’s easily one of the best in the market today.

Well, there are a couple of things that make this kayak unique.

One is that it’s the only kayak with aluminum frames (hence the name). This patented design puts a lightweight aluminum frame in the bow and stern of the boat.

It provides amazing tracking when you’re on the move. No wobbling from side to side as with other inflatable kayaks.

This plus the skeg underneath gives you unmatched straightness while rowing.

Another unique feature is that this is a convertible kayak.

Switching between these is as easy as rearranging the seats and pulling a zipper.

If you’re looking for stability, boy does this kayak have it.

Not only is it extra long, but it also uses drop-stitch technology for its flooring.

Drop-stitched tubes allow the floor to be flat (instead of the round, tube shapes we’re used to). You can pump high pressures into these and they won’t give – allowing you to stand up on your kayak!

As for strength, this kayak uses 3-layers of material – vinyl wrapped in PVC fabric. This makes it tough enough to take hits from rocks.

There’s only one problem: this kayak isn’t self-bailing.

The AdvanceFrame is designed so that water doesn’t go in. But if it does… well… you’ll have to scoop it out.

Hassle, but not the end of the world.

If you’re looking for the best of the best…

If you’re looking for a kayak that has the performance of a hard-shell, but the convenience of an inflatable…

If you’re not concerned about the price tag…

Then I highly recommend the Sea Eagle RazorLite.

This is perhaps the most innovative inflatable kayak in the market today.

This means there are ZERO round tubes, only flat ones. This gives the RazorLite the best possible performance – all while staying super convenient!

That by itself is already worth the price tag. But there’s so much more.

Talk about seaworthy, the Razorlite not only checks all 6 boxes – it blows them out of the water!

If I had to pick only one inflatable kayak, I would choose this one.

But before I get ahead of myself, I should mention the price tag.

It’ll scare away anyone who is not 100% sure they want it.

But if you’re determined to get the best inflatable kayak for sea use, I challenge you to find a better one than the Sea Eagle RazorLite.

Want a good kayak on a budget?

Check out the Intex Excursion Pro.

Now, I wouldn’t recommend taking this to deep seas or wave surfing. This boat is designed for fishing in calm lakes – not riding giant waves.

However, if you want a simple, affordable kayak for light sea use – the Excursion Pro will give you great value for money.

Just look at its amazing features in this video:

It’s like the Intex Mariner (read my review here) of kayaks – FAR better in features and strength than cheapos, but not quite at the professional level.

So unless you’re doing somersaults as waves crash upon you… or twisting and turning away from rocks as you speed downstream… the Excursion Pro will be a bang for the buck.

Ready to hit the waves?

Grab any of these inflatable kayaks – or choose one that ticks the 6 seaworthy features – and you’re good to go!

I read several blogs related to the inflatable kayaks for ocean fishing. But this blog by anchor.travel was a quality one. Keep it up!