You’ve probably heard that you need to install a fuse or circuit breaker on your trolling motor. Both fuses and circuit breakers work to prevent the electrical system from overheating and damaging the wires or other components.

But what if you already have a circuit breaker on your motor? Do you need to install a fuse as well?

What if you’ve just installed your motor for the first time? Is it better to install a fuse or a circuit breaker?

What is the difference between the two?

In this article, we’ll answer all of these questions. We’ll also discuss how to install a fuse on your trolling motor if you choose to do so.

Do Trolling Motors Have Fuses?

Generally speaking, trolling motors don’t come with the fuses or circuit breakers included, though the owner’s manual will probably recommend using one or the other.

Just because the fuses aren’t included doesn’t mean you can get away without using them. Coast Guard standards require that any ungrounded conductor be protected by either a fuse or a circuit breaker.

When choosing your fuse or circuit breaker, it’s extremely important to consider the amperage you need for your trolling motor. It will likely tell you outright in the owner’s manual, but if it doesn’t, you can figure it out on your own. 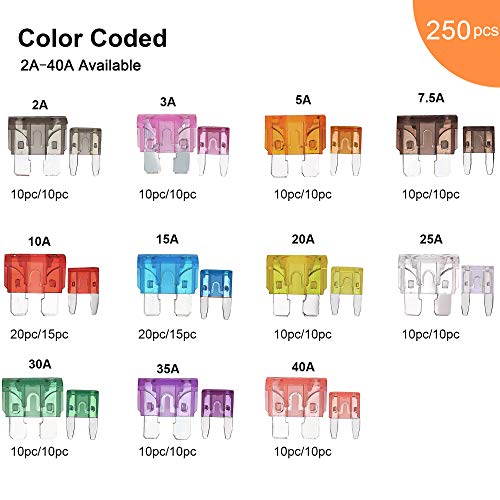 Though not directly related to the type of fuse you need, it’s also important to consider the size of the wire running from the motor to the battery.

If your motor is made for use with a 10-gauge wire and you use a larger 6-gauge wire, the system may overheat, damaging various components and possibly causing a fire.

Once you’ve determined the amount of amperage you need covering and the size of wire you need, you’re ready to buy the fuse or circuit breaker.

But you’re still not sure which one you should use.

What is the difference between fuses and circuit breakers, and which is better to use on your trolling motor?

Fuses and circuit breakers basically do the same thing, but they work in different ways.

A fuse works by heating up. Any extra current flowing through the system will cause this heating, and when it reaches a temperature that would cause your conductor to melt, the fuse blows.

On the other hand, a circuit breaker works by flipping a switch to, well, “break” the electrical circuit. The heat from the extra current causes a metal strip inside the breaker to flex, which in turn trips the switch and stops the flow of current. 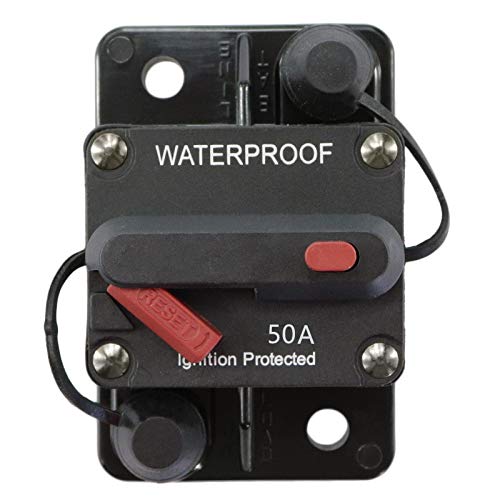 Fuses are generally smaller, cheaper, and have higher breaking points than circuit breakers. That said, every time you blow a fuse, you have to replace it. This can be a hassle and may get expensive over time.

Circuit breakers are larger and may have lower breaking points, but anytime you blow a circuit breaker, all you have to do is reset it.

Resetting a circuit breaker is easy and convenient to do, especially if you find yourself out in the middle of a large lake with a dead trolling motor. Simply push a button and you’re back in business.

If you decide to use a fuse instead of a circuit breaker, you’ll want to keep at least one or two extra fuses with you whenever you head out on the water. Remember, every time a fuse blows, you’ll have to replace it with a new one.

So how do you do that?

In fact, how do you install a fuse in the first place?

Keep reading to find out more.

How Do You Install a Fuse on Your Trolling Motor?

Inline fuses are the most popular type used with trolling motors. To install an inline fuse, you’ll probably want to familiarize yourself with the process first. Read the instructions included with the fuse, watch the tutorial video below, and make sure you gather the appropriate tools before starting.

To wire an inline fuse to your trolling motor, you will need:

First, use the wire strippers to take off about ½ to 1 inch of the plastic covering off the positive and negative cables of your power wire as well as each wire of the inline fuse.

Twist the exposed wire ends a few times to tighten them up. Insert the positive wire from the power cable into one side of a butt connector, then insert one of the wires from the fuse into the other end.

Use the wire crimpers to press the wires into the metal in the middle part of the butt connector. Pull lightly on each wire to make sure it’s crimped correctly.

Using the hand torch, move the flame back and forth over the butt connector to shrink it around the wire.

Next, insert the other wire from the inline fuse into a crimp connector and crimp it down. Use the torch to shrink the plastic as you did with the butt connector.

Take another crimp connector and place it on the exposed end of the negative wire coming from the power cord. Repeat the process of crimping and torching.

If you want, you can use electrical tape to provide an extra barrier over the connection.

Attach the power cord back into the trolling motor. You should be good to go.

Remember, you’ll need to repeat this process each time you blow a fuse. If you’d rather install a circuit breaker instead, check out this video.

Installing a fuse or circuit breaker on your trolling motor is important to prevent damage if your motor becomes stressed or overheated.

You can choose to install either a circuit breaker or a fuse. If you install a fuse, follow the steps in this guide for wiring the fuse into your motor’s electrical system, and remember to keep extra fuses with you when you’re out on the water in case you need to replace a fuse mid-trip.