There are many anglers that discount inflatable watercrafts and believe that traditional boats are the way to go. However, when they use inflatables, their entire story changes.

This is because of the many benefits inflatables provide – portability, affordability, and convenience are only some of these advantages.

That being said, because of the different inflatable watercrafts available, it’s often difficult to choose which one is best suited to your needs. This is even harder when you’re a beginner.

We have been there and are here to help. Our guide to float tubes and inflatable boats covers everything from what they are to their advantages and disadvantages.

Read on to find out which vessel is the right one for you.

What Is an Inflatable Boat?

Inflatable boats, also known as SIBs (soft inflatable boats), are lightweight vessels with soft hulls. Their durability, affordability, and portability make them the perfect choice for those not willing to invest in traditional boats.

What Is a Float Tube?

Float tubes, also known as belly boats, are single-person U-shaped watercrafts. They consist of durable inner tubes with built-in seats that leave the user with their legs dangling in the water.

Because float tubes are so small, they are propelled by anglers’ feet. This is done using fins.

While both, float tubes and inflatable boats are inflatable, they are very different in terms of design and use. Consider the following factors before investing in either one.

Float tubes of the past weren’t very sturdy, but this is no longer a concern. They’re usually made of durable PVC and urethane and don’t puncture easily.

Inflatable boats are made of three main materials – PVC, Hypalon (CSM), and polyurethane (PU). These are also extremely durable, with some Hypalon inflatable boats lasting up to 20 years.

Punctures and leaks aren’t likely, but if they do happen, they’re easy to repair – finding the leak and using inflatable boat sealant usually does the trick. 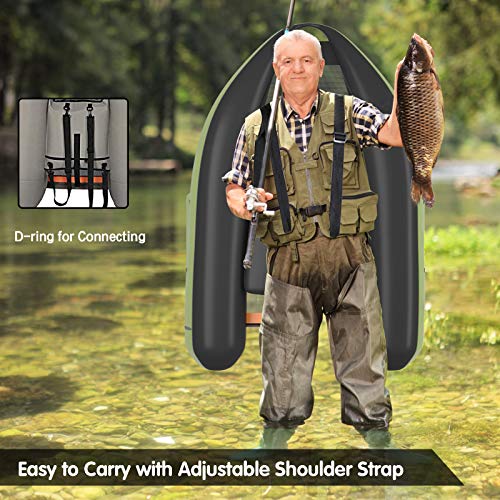 Both, inflatable boats and float tubes are lightweight and compact. They’re highly portable and easy to transport and store.

Float tubes are smaller, more compact, and often come with backpack straps. If not, they can easily be packed into one.

It is because of this reason that float tubes are extremely popular with those going on hikes.

Float tubes are very limited in their use – while they’re great on flat water, they do not do well in rivers, and definitely can’t be used in the ocean. Because they cannot withstand rough waters, float tubes are more suitable for use in lakes, bays, and ponds.

Inflatable boats can be seaworthy but aren’t safe in rough waters, especially when it’s extremely windy. Although they are known for their stability, they are extremely lightweight and harsh weather can result in them flipping over.

While float tubes are limited to a single person and thus, only suitable for solo anglers, inflatable boats can carry a couple of extra passengers.

One of the reasons inflatable boats are so beloved is because of how affordable they are compared to traditional boats.

Float tubes offer anglers the same advantage since they’re inexpensive and easy to maintain. Beginners who don’t want to invest a lot of money into vessels can start out with float tubes and then advance onto other vessels.

If speed is a priority for you, you should probably opt for inflatable boats. Float tubes cannot use motors and are powered by one’s feet – they’re not only slow, but also difficult to control.

Additionally, because they’re slow and powered by your feet, they’re not suitable for long distances. Most often, they’re used by anglers who would rather get up close to the fish rather than fishing from the shore.

If distance is a deciding factor for you, inflatable boats are definitely the better option.

One of the main advantages of float tubes is that they can go through tight spaces whereas inflatable boats cannot. They’re also stealthier and allow anglers to sneak up on fish.

Because float tubes are propelled by the angler’s feet, there is very little noise and fish are less likely to be scared away.

Additionally, the lack of a motor ensures that the water isn’t disturbed as much, which allows anglers to catch fish more easily.

Although getting used to a float tube takes some time, anglers claim that it makes fishing easier. Fly fishermen are especially fond of float tubes and tout their benefits.

However, float tubes don’t allow you to fish in a standing position while inflatable boats do.

Anglers who prefer not to get wet while fishing would do better with inflatable boats since float tubes involve the legs being submerged into water.

Comfort varies from angler to angler, but as a rule of thumb, inflatable boats are more comfortable than float tubes.

Even when float tubes provide more cushion, anglers are still in contact with the water and can get cold and tired. This is made worse when anglers make the mistake of purchasing float tubes that sit far down in the water.

While waders can keep anglers warm, they can’t protect them from extremely cold water. Therefore, float tubes are limited to warmer water.

While inflatable boats can have electric trolling motors attached, this is not the case for float tubes. Since float tubes are extremely small, there’s no space for a motor.

While this does cause inconvenience, it does have some advantages as well. Because there’s no engine, there is no need for maintenance. Additionally, you don’t have to worry about fuel and are ensured a quiet fishing experience.

While fins are used to move around, this doesn’t get anglers very far – float tubes are notoriously hard to maneuver and are not suitable for those looking for speed.

Additionally, since they’re too small for motors, and most can’t be used with oars, the only method of propelling them is via one’s feet.

Not only do you require fins for this, but this method can also be inconvenient and tiring. However, it is helpful when it comes to accessibility since float tubes can access areas that larger boats cannot.

Inflatable boats, on the other hand, can be rowed and used with electric engines. The latter is more convenient and thus, more common.

Since float tubes are so limited on space, there isn’t much room for fishing gear. Inflatable boats, while not as spacious as RIBs, have much more storage.

While inflatable boats and float tubes are very different, they do offer some of the same advantages, including affordability and portability.

However, the nuances of each are what will help you decide which is the right choice for you. Look over the different factors and consider your needs before making the final decision and let us know which one you decide to pick in the comments below.