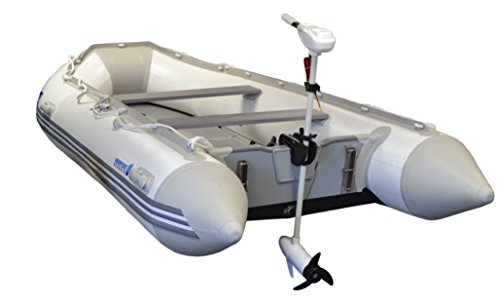 Each of these trolling motor mounts has different uses, as well as advantages and disadvantages. It’s important to understand these thoroughly so you can get the best trolling motor for your boat and your needs.

Transom mount trolling motors are more popular on smaller boats. They do not have to be mounted to the boat with a plate, as bow-mounted motors do. Instead, they usually attach onto the transom with a basic clamp.

Transom mount trolling motors tend to be easier to use than bow-mounted ones. They also don’t usually clutter up your deck with cables and foot pedals, as bow-mounted versions can.

Transom-mounted trolling motors are usually less expensive than their bow-mounted counterparts. This is due to their simpler design. However, trolling motors mounted on the transom don’t give you as much control over your boat and tend to come with fewer options.

If you’re looking to do some basic trolling and you only need to get your boat generally in position before you start fishing, then a transom-mount trolling motor may be your best choice. They are also great for smaller boats, like dinghies, canoes, kayaks, etc.

Some people chose transom-mounted trolling motors because they are more comfortable reclining on the back of the boat. When you have a transom mount motor, you usually don’t have to stand up to use it.

Transom-mounted trolling motors most often have hand controls, though they can also be wired with foot controls. These are usually after-market purchases that you wire in and program yourself.

Trolling motors mounted on the transom may not have as many features as those mounted on the bow. Most do not have spot-lock, often because they are unable to work at such a precise level.

Finally, if you tend to use backtrolling when you fish, you’ll want a transom-mounted trolling motor. These easily perform this technique and allow you to catch more fish this way.

Bow-mounted trolling motors are popular among more serious fishermen, as well as those with medium to large-sized boats (those over 14 feet). They are especially good for bass boats with casting decks, as you can control them from anywhere with the help of a remote or a foot pedal.

Bow mount trolling motors are harder to install than transom mount versions. The boat needs a large deck with plenty of space for installing the mounting bracket and the motor itself.

Bow mounted-trolling motors offer better control and more precision than trolling motors mounted on the transom do. Because they pull the boat rather than pushing it, they do a better job of getting into small areas.

Bow-mount trolling motors are also better at holding your boat in one place. They are more likely to come with spot lock, which allows you to use GPS technology to keep your boat over a single area until you decide it’s time to leave.

Trolling motors that mount on the bow tend to come with a wider variety of control options already installed, so you won’t have to do that after you buy the boat. They also come with more features than most transom-mounted versions do. However, this also makes them more expensive.

Another feature they may have include autopilot, where you set a course and the boat guides itself without your constant intervention. This can be useful if your hands are busy and you don’t want to mess with foot controls.

Bow-mounted trolling motors tend to take up a significant amount of room, so you’ll want to be sure that your boat has space. Items that go with them, like foot pedals or remote controls, can also clutter your space with cables and more.

Many bow-mounted trolling motors work more efficiently than transom-mounted versions. Your motor may work longer before it drains your battery.

Unless you like backtrolling, most anglers recommend a bow-mounted trolling motor as long as your boat is big enough, you have enough space, and you can afford it. The precision they offer beats many of the advantages of a transom-mounted motor, for most anglers .

The Newport Vessels NV-Series Saltwater Transom Mounted Trolling Motor is popular among anglers for several reasons. Buy it with a variety of thrust levels so you can match it to your needs and the size of your specific boat. 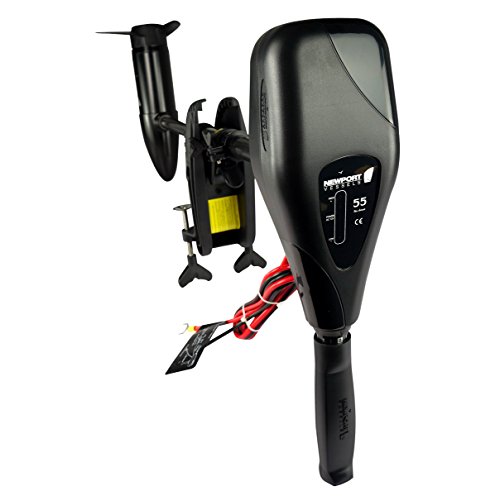 This trolling motor may be small, but it’s made for all sorts of use. It’s rated for saltwater, which means that it has extra protection against corrosion. You can also use it in freshwater, though, and many anglers do just that.

The motor is also fully adjustable. You can adjust everything, including: the length of the tiller handle, the height the motor is out of the water, and the angle at which it rides in the water. All of these adjustments mean you can make it fit your boat perfectly.

This motor offers 8-speed options, which is more than many transom-mounted motors offer. Five of these speeds will move you forward while three will move you backward, so you have all the options you need to position your boat exactly where you want it.

Newport Vessels offers a 2-year warranty on this trolling motor, so they stand behind it when it comes to quality. If you have problems with the motor, just let them know and they’ll help you get it working again soon.

If you’re looking for a transom-mount trolling motor, you can’t go wrong with the NV Series. Buy one today and enjoy it for years!

If you’re looking for a trolling motor to mount on the bow of your boat, look no further than the AQUOS Haswing CaymanB Bow Mount Electric Trolling Motor. This trolling motor is designed for use in both freshwater and saltwater, so it has all the protection it needs against corrosion. 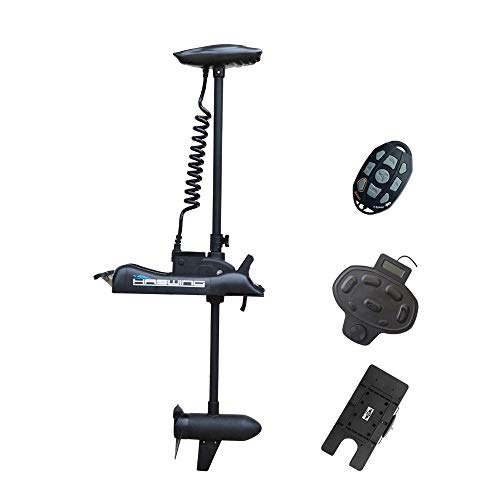 You can buy this trolling motor in either white or black so it will be sure to add to the overall look and feel of your boat. A wireless remote control means that you only have to be within 164 feet of the motor to operate it.

This trolling motor also comes with cruise control. If you want to focus on fishing and not on how fast you’re going, you can set it and forget it. Trust this little motor to keep you moving just the way you want to no matter what.

Finally, it’s easy to take this trolling motor in and out of the water while it’s mounted on your boat. A simple stow-and-deploy pedal lets you tilt it into or out of the water. A depth collar allows you to change the depth of your propeller easily, too.

If you’re looking for a small bow-mounted trolling motor, you can’t go wrong with this option from AQUOS.

Now that you know how bow mount and transom mount trolling motors are different, you can pick the one that is best for you. Make sure you get a trolling motor that suits your specific needs so you can get more out of it.

Once you’ve chosen the best trolling motor for you, install it and get out on the water again soon. Enjoy your time and use your trolling motor as much as you can!