“What is the best material for inflatable boats?”

You may have heard that Hypalon is a lot better than PVC. In fact, some people swear upon this. Is it true?

At the same time, you’ll also find that there aren’t many Hypalon boats for sale anymore. What’s this all about?

Today, we’re going to take a deeper look at this. By the end of this article, you’ll know:

What are PVC and Hypalon?

If you ask someone what inflatable boats are made of, chances are they’ll say “rubber.”

A more accurate answer would be either PVC or Hypalon. These are the two most popular inflatable boat materials today.

PVC, or polyvinyl chloride, is strong, lightweight plastic. It is also very flexible and waterproof, making it ideal for inflatable boats.

Hypalon, on the other hand, is the trademark name of DuPont’s chlorosulfonated polyethylene synthetic rubber. It’s well known for its chemical, temperature, and UV resistance.

But what’s it about these two materials that make them so special? And which one is the better among the two?

PVC vs Hypalon – What’s the Best?

If you ask me for a straight-up answer to this question, I’ll tell you “neither.”

I know, I know, it’s boring and inconclusive.

But these two materials are so equal, it’s impossible to choose only one. That’s why both of these materials are the stars of the inflatable boat world, not just one of them.

So instead of giving you a direct answer, let’s take a look where these materials excel, and where they can improve.

In terms of durability, there’s one clear winner: Hypalon.

Sure, PVC is also great at this, but it’s not quite at the same level as Hypalon.

Hypalon is capable of resisting abrasion, chemicals, extreme temperatures, and UV rays. It has a reputation for handling anything you throw at it. You can also leave it out in the sun without worrying about damage too much. With PVC, you’ll have to be a little more careful.

Plus, Hypalon is also straight-up stronger. You can see it’s strength demonstrated in this video:

Hypalon may be stronger, but PVC takes the cake when it comes to convenience.

PVC is a lot lighter than Hypalon. Not only that, but it is also easier to fold up. This is why PVC boats are more portable than Hypalon, it’s so easy to bring them along.

You can also fold up Hypalon, however, this isn’t very good for the material. So if you’re not one to leave your boat open, PVC will be the better material for you. You can stuff PVC boats in the bag for months at a time without any worry. 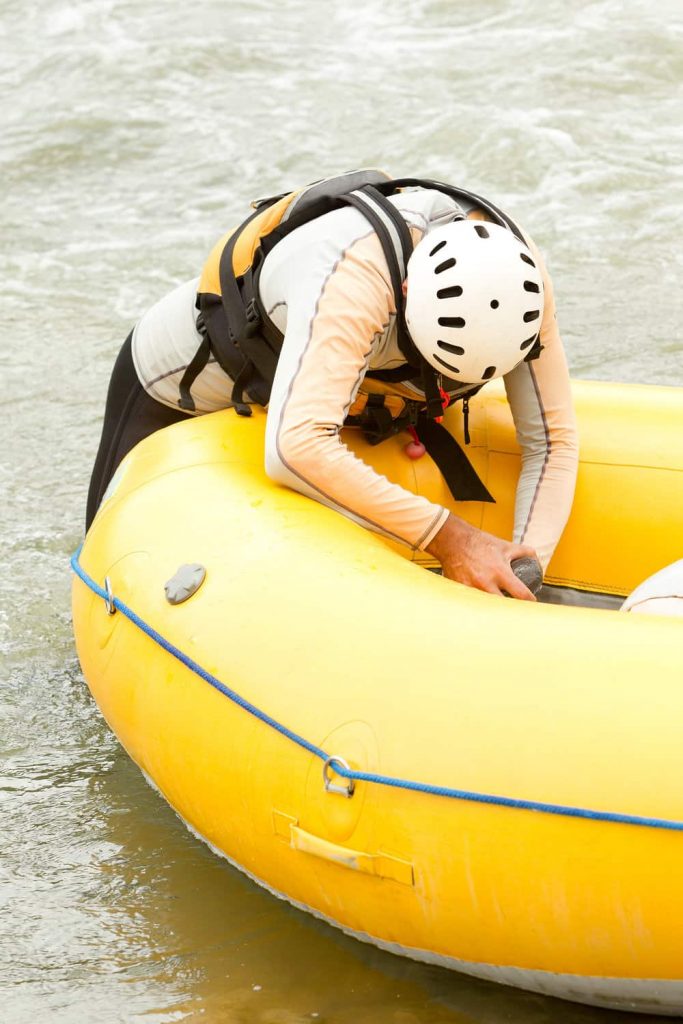 Since Hypalon is more durable, you can expect it to last longer.

Because it’s so resistant to almost everything, Hypalon won’t deteriorate quickly at all. On the other hand, you’ll have to be more careful with your PVC to make it last longer.

Aside from that, Hypalon is also easier to patch up. You can easily put a temporary patch if you get in trouble on the water.

It’s also not hard at all to put a permanent patch on your Hypalon boat. All you’ll need is good glue, and the rest will be easy.

However, PVC is easier to clean. Hypalon is quite porous, so it can get dirty fast. 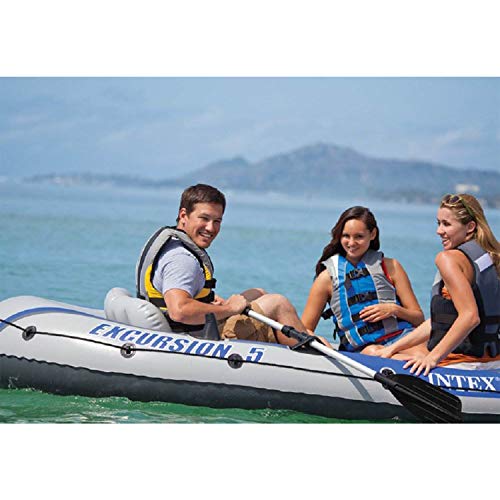 Everyone has their own preference, so I can never say which has better looks.

What I can say though, is which has more options.

PVC comes in so many different colors, you can choose anything you want. Meanwhile, Hypalon doesn’t have this many options.

You can paint Hypalon, but it won’t last very long. Hypalon tends to fade fast, so your paint won’t look very good after a while.

The biggest advantage PVC has over Hypalon is the price.

When you compare these two materials, you’ll find that Hypalon costs quite a lot more. Considering it’s more resistant to everything, it only makes sense that PVC would be a lot cheaper.

This is also one of the main factors why PVC boats are super popular. You don’t have to spend a lot to get an amazing inflatable boat. You can even get family-sized boats for very affordable prices (such as the Intex Excursion 5). 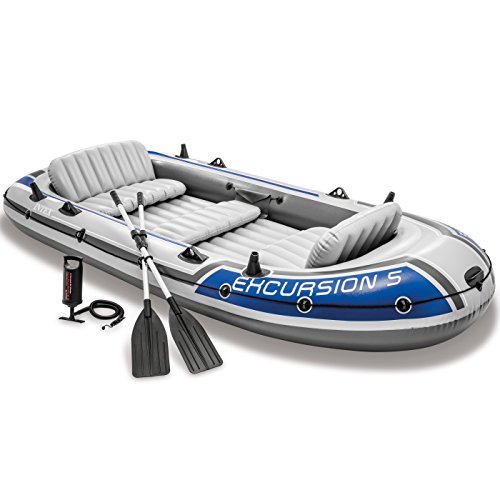 I’ve said it before and I’ll say it again, there’s no clear winner here. It all depends on what you’re looking for.

If you want a high-quality boat that can withstand everything you throw at it, Hypalon is the better choice. But if you’re looking for a budget-friendly boat that looks great and is portable, PVC is for you.

Can You Still Get Hypalon?

Let’s say you decide to get a Hypalon boat. You search online for an inflatable boat made from Hypalon, but what do you find?

You find that it’s very difficult to find one of these.

Why? Isn’t Hypalon one of the most popular materials for inflatable boats?

Yes. However, DuPont stopped producing Hypalon back in 2009. They reached this decision due to environmental pressure, high-costs, and the dangers that came with manufacturing this.

So what then? Is PVC your only option nowadays?

Remember, Hypalon is a trademark name. It’s the most popular chlorosulfonated polyethylene (or CSPE), but not the only CSPE. A lot of people refer to all CSPEs as Hypalon thanks to how popular the brand was.

That’s why even nowadays that Hypalon is no longer manufactured, there are still “Hypalon” boats. The reason why you can’t seem to find them is that they go under different names now.

So instead of looking for “Hypalon”, try looking for terms such as CSPE, CPE, or CSM. These are almost exactly the same material. So you can expect the same toughness that Hypalon was famous for.

Hypalon and PVC are at the top for a reason, and there’s very little that separates these two. But by now, you should know what type of boat suits you best.

As one who has been in the marine industry for over 35 years I have to say this article was very well stated, fair and accurate. To some degree it emphasizes the adage, you get what you pay for. Care for either product will indeed extend the life however how they are made and with what thickness of the material also plays a part. All my CSPE sport boats have lasted a minimum of 12 years with average care. Name brands tend to cost more so my advise is to look for well built off brand names, likely built overseas. As one who is sailing year round and using a tender I opt for CSPE, however I will not lie, I've owned good PVC water toys and rafts and they are certainly worth the money. Last piece of advise is a the writer of this article stated I will echo, consider your use of the product.