“What are the best inflatables made of?”

If you’re buying an inflatable boat, this is one of the first questions that’ll pop up. 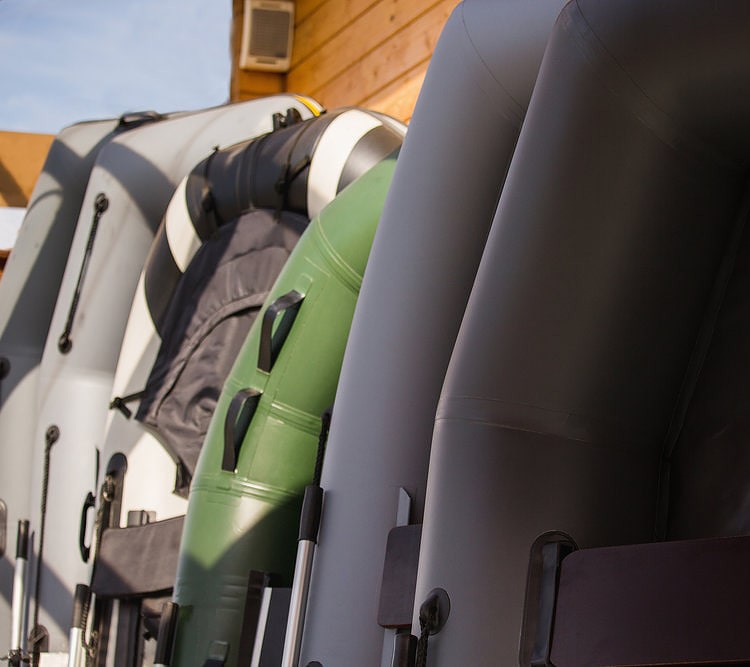 We’ve all heard of PVC and Hypalon – but did you know there’s more?

Today, we’re taking a look at:

I’ll also throw in a comparison chart at the end so you can easily see which one suits you best.

What are Inflatable Boats Made Of? – The 5 Best Materials

You can put every inflatable boat material into two categories:

But the difference doesn’t stop there.

There are a bunch of rubber and plastic types.

Let’s have a look at each one.

Chlorosulfunated polyethylene with polychloroprene, commonly known as “Hypalon”, is the best rubber for inflatable boats.

You’ve surely heard people swearing by Hypalon. Some even call PVC “useless” compared to it.

While that’s not exactly true, Hypalon does trump PVC in a lot of areas.

Check out this video to see how much stronger Hypalon is:

Yes, it is more expensive than PVC.

But for serious boaters, Hypalon is worth its price tag.

Note: Hypalon and Pennel Orca are the same thing. As is any boat made with CSM, CSPE, or CPE.

The most common type of inflatable material is PVC.

to professional boats such as those made by ALEKO.

What’s so great about PVC anyway?

Well, PVC is not only strong and water-resistant material – it’s also lightweight and cheap.

It’s these two features that make PVC so popular.

But unless you’re going to abuse your boat, PVC will be enough.

With its price tag, you can see why so many people prefer PVC.

A LOT of people (myself included) mix up PVC and vinyl.

Wait… Aren’t they the same thing?

What’s the difference between PVC and vinyl then?

PVC is a vinyl that has gone through polymerization.

I won’t get what that process is (it’s quite complicated), but after polymerization, the fabric comes out:

It’s fair to say then that PVC is a better version of vinyl.

So what can you expect from a vinyl boat?

If you’re only going on calm waters, you shouldn’t run into any problems. Plus, these boats (such as the Seahawk 4) are extra-cheap. 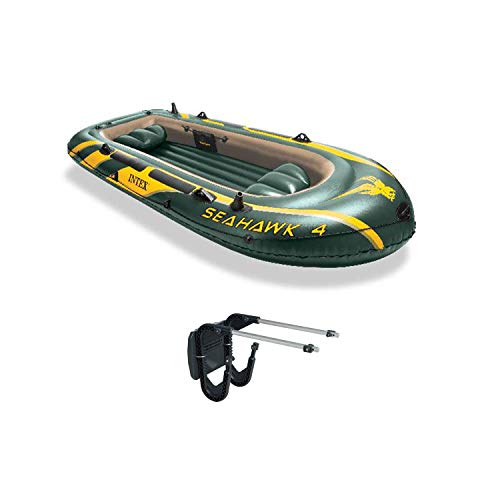 In terms of strength though, vinyl is one of the weakest materials around.

Note: Always remember some people mix PVC and vinyl. Some boats say they’re made from vinyl when they actually use PVC (and vice versa). Make sure to check for yourself.

Urethane (or polyurethane) inflatable boats are the new boys in town.

For the longest time, no one cared about urethane.

This material was too hard – and only got harder when placed under the sun.

Recently though, this material has risen to the top of the inflatable boat world.

With new technology, manufacturers took this hard and unusable material – and transformed it into the toughest inflatable boat material.

It’s tougher than vinyl, PVC, and yes, even Hypalon!

You won’t find a stronger material for your boat than this today.

You also won’t find another material as expensive.

The biggest problem with urethane is its price. If you thought Hypalon was expensive, wait until you see Urethane’s cost.

Because of this, it’s difficult to find urethane boats for sale online.

The first inflatable boats in history were made with Neoprene (or polychloroprene) rubber.

It’s the same material you find in wetsuits.

Manufacturers would take cotton, coat it with Neoprene, then fill it up with air.

This worked – but needed some serious upgrades.

The cotton would rot away fast, leaving only the Neoprene behind. Now, Neoprene can hold on to air (it’s one of the best materials at this). But with the cotton gone, it couldn’t stand alone.

To deal with this, manufacturers started using chlorosulfonated polyethylene instead of cotton. And that’s exactly how Hypalon was born.

Nowadays, Neoprene/cotton boats are almost nowhere to be found.

It’s nice to know how inflatable boats all started though.

What is the Best Material for Inflatable Boats?

Here’s a helpful chart for you:

Looking at that chart, you’ll realize how evenly matched all these materials are.

You’ll realize that vinyl and urethane are two extremes, while PVC and Hypalon are the most complete (no wonder they’re the most popular).

How to Tell Inflatable Materials Apart

Let’s say you found some old inflatable boat – or let’s say someone gave you their boat – how do you tell what it’s made of?

If you can’t find the manufacturer and model of the boat, you can at least tell if it’s plastic or rubber.

This is all you need to know to patch up the boat properly.

The easiest way to do this is to feel the material. Rubber materials are more smooth, while plastics are a bit rougher.

Try checking inside the valve.

If the material on the inside is dark gray, it’s most likely rubber. If it’s the same color as the outside, it’s probably a plastic material.

Knowing the differences between inflatable materials is important.

But now that you know what inflatable boats are made of, you’ll never have to worry about getting the wrong material ever again.

Have a question? Send me a comment below and I’ll get right back to you.

1 thought on “What are Inflatable Boats Made Of? 5 Materials You Need to Know About”