When it comes to powering your trolling motor, chances are, you’ve run into one or both of the following problems. 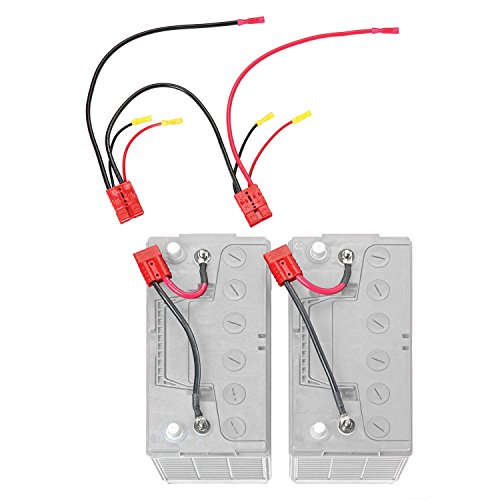 So what do those terms, “series” and “parallel” really mean?

Which wiring system is better, which one lasts longer, and which one gives the most power?

Is it Better to Connect Batteries in Series or Parallel?

It depends entirely on what you’re hoping to accomplish by wiring multiple batteries together. Let’s take a closer look at what each term means.

If you have a 12V trolling motor, you may think that hooking up three 12V batteries in series will triple your battery life, but this is not the case. Instead, this would flood your trolling motor with 36 volts of power, likely melting the wiring and potentially causing a fire.

If you want to extend the run time of your trolling motor by using multiple batteries, you’ll need to connect them in parallel.

Say you’ve got a 12V trolling motor that always dies in the middle of your day on the water. If you don’t have an onboard charger, you’ll find yourself paddling or needing to be towed back to shore.

Wiring in series and in parallel are both generally safe practices as long as you follow a few safety guidelines.

Does Series or Parallel Give More Power?

Wiring your batteries in series will produce a greater voltage output, thus giving you more power.

So if your trolling motor needs a higher voltage than one battery can produce alone, you’ll want to wire multiple batteries together in series.

Wiring your batteries in parallel will increase your battery capacity, or available amp hours, thus giving you a longer run time.

So if you need to increase your battery life without increasing your voltage output, you’ll want to wire multiple batteries in parallel.

How Many Batteries Can Be Connected in Series?

When wiring your batteries in series, you can connect as many as necessary. Technically, there isn’t a limit to how many batteries can be wired in series, but you’ll want to be careful not to produce too large a voltage for your trolling motor or the wires being used.

Remember, wiring in series increases the voltage. If you find yourself having to wire more than four batteries, you might want to do some research to find if there are larger batteries you could be using instead.

Also, it’s a good idea to check with the battery manufacturer’s instructions for safety information about wiring your specific batteries in series.

How Many Batteries Can Be Connected in Parallel?

It is generally considered safe to wire up two four batteries together in parallel. Of course, that is assuming the batteries are all identical and equally charged.

The biggest problem encountered with wiring in parallel is having one weak battery that weakens the overall system. For this reason, it’s best not to combine new and old batteries, as the old batteries may lose a charge faster and drain the other batteries.

Again, read the manufacturer’s instructions before wiring batteries in parallel to make sure you don’t exceed the maximum recommended number of batteries.

How to Connect Trolling Motor Batteries in Series

Set your batteries in the appropriate place on your boat. You’ll want to secure them with battery boxes or mounts.

Repeat this process for as many batteries as you have.

Finally, connect the trolling motor’s positive lead to the positive terminal on the last battery.

Your batteries are now wired in series.

For a visual demonstration of how to connect batteries in series, check out this video.

HOW TO CONNECT BATTERIES IN SERIES

How to Connect Trolling Motor Batteries in Parallel

For wiring in parallel, you will also need to use jumper wires (again, check out this video if you want to make them yourself).

Make sure your batteries are in the proper place and secured in your boat.

Your batteries are now wired in parallel.

This video gives you a good visual demonstration on how to connect your batteries in parallel.

HOW TO CONNECT BATTERIES IN PARALLEL

It’s as simple as that!

If you follow the steps in this guide, you should be able to easily wire your batteries either in series or in parallel, depending on whether you need a greater power output or longer battery life.