Trolling motors have been a life-changing tool for anglers. They get to move efficiently without much effect, and their quiet operation allows you to stay in stealth while approaching fish.

However, there are different types of motors, such as the transom mount trolling motor. 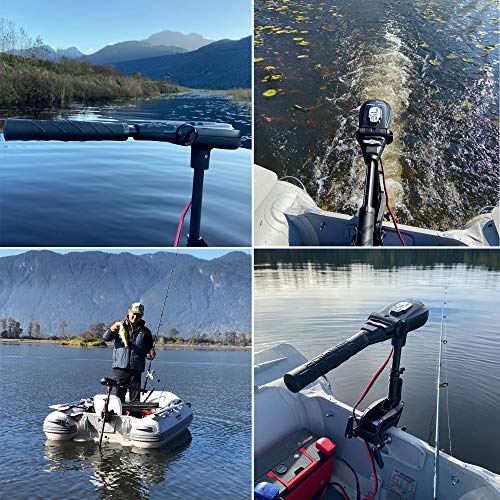 When it comes to inflatable boats and other small watercraft, the transom mount trolling motor is the most popular.

We’ll discuss everything you need to know here.

How Does It Work

A transom mount trolling motor mounts to the transom of your boat and is designed to thrust your vessel from the rear.

Compared to the bow mount motors, which pulls your boat through the water.

Transom trolling motors are typically easy to install simply by clamping onto a transom mount. In addition, they’re also very affordable and simple to operate.

The transom mount trolling motor is designed for small hulls such as kayaks, canoes, inflatable boats, RIBs, and pontoons.

They are effective in powering any vessel that is below 16 to 18 feet.

Also, transom mounts are easily accessible because they use hand controls, so you won’t have to be on your feet all day.

Many fishing enthusiasts use transom mount trolling motors because it has reliable horsepower while cruising from one fishing spot to the next.

In addition, many people prefer the electric aspect of the trolling motor because it can save on gas costs for your boat.

How Does It Compare to Other Mount Trolling Motors

Consider these factors when comparing transom motors to other types.

Bow mount trolling motors have better control because they pull the boat through the water rather than push it from behind.

Since turning requires the front of the boat to move first, pulling from the front will have a more responsive and precise reaction than pushing the boat from the back.

This makes the bow mount motor’s steering and maneuverability much more precise, allowing you to navigate in tight areas.

Engine mount motors are the most difficult to control compared to the other two types.

Besides navigation, they usually have unique steering options as well. For example, transom mount motors use a hand tiller to steer the boat, while bow mount motors usually use a foot pedal or remote control.

The benefit of hand control for transom motors is that they provide a real-time response, and there won’t be any clutter on deck compared to foot controls. However, having foot control does allow for hands-free operation. In addition, it can be used on anything in the boat.

The downside of using foot pedals is that it has a slower response time, it has more clutter due to the pedal and wiring, and it has a higher chance of malfunction or break.

One of the disadvantages of a transom trolling motor is that it doesn’t hold you in place while you’re fishing very well.

That’s because it doesn’t have a spot-lock feature, unlike the bow mount motors.

However, the transom motor can perform back trolling, which allows you to slow-walk the jig to better position yourself to catch fish.

In addition, transom mount trolling motors are much easier to install since they only require a single clamp.

Also, they take up less space compared to other motor types.

Comparatively, bow mount trolling motors will take up deck space and will be much harder to install.

That’s because you can only install a bow mount trolling motor with a flat deck and room to install it from the front of your vessel.

On the other hand, bow-mounted trolling motors are designed for advanced fishermen who want better control when steering and own a medium to a large-sized vessel, typically over 14 feet.

Engine mounts can be tricky to install because they must be mounted to the cavitation plate of your boat’s outboard motor.

However, the advantage of engine mount motors is that they’re ideal for boats with little room and great for space-saving.

The motor is completely submerged while the engine is off and comes out of the waters when the boat is on plane.

What to Consider With Your Transom Mount Trolling Motor

The type of boat, the size, and the purpose for boating will help you identify which features are most important to you when finding a trolling motor.

Shaft length is crucial to ensure the most precise control of your boat.

If the shaft is too long, you’ll continuously drag or hit objects in the water, such as rocks and weeds.

When the shaft of the motor is too short, the prop won’t be submerged enough and as a result will lose a lot of performance and speed. Ideally, a trolling motor should be height adjustable.

The lower the voltage, the less thrust and staying power it has. High volt motors enable anglers to fish for longer periods, since it draws lower amps, while still having more thrust.

A 12-volt model is designed for vessels that are 16 feet or under. Longer boats will likely require 24 or 36-volt motors.

If you own a small inflatable boat, you’ll usually want to go with the transom mount trolling motor.

These motors are easy to install, make it comfortable to ride with, and work effectively.

Make sure that you research the features you’ll want in your transom mount the motor so that you’re able to choose the right trolling motor for you.

Once you’ve found one, get out to the waters and start fishing!