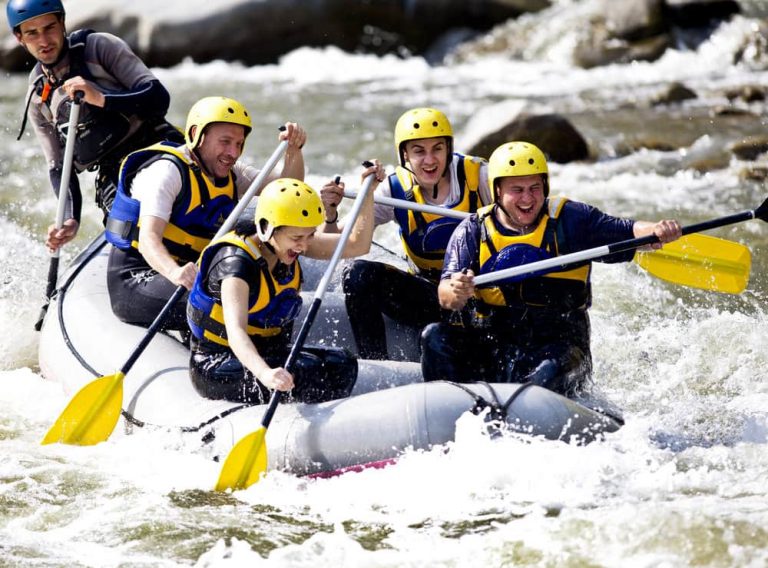 Intex is easily one of the most popular inflatable brands.

With their affordable, no-nonsense designs, people love these boats.

That said, everyone knows these cheap boats aren’t built for rough use…

The Intex Mariner 4 challenges that assumption. It’s by far the strongest and most durable dinghy in Intex’s line-up.

But how strong is it?

Can it challenge professional boats?

Should you pick up another Intex instead?

Today, we’re reviewing the Mariner 4 in-depth – we’ll answer all these questions and more.

Who is The Mariner For?

Intex is NOT the first brand that professional fishermen look to. For them, these are cheap recreational crafts for amateurs.

That is… until they see the Mariner 4.

The Mariner is Intex’s only professional series inflatable boat.

It’s loaded with features that make it stronger, more durable, and higher quality than any other Intex.

Despite all this, the Mariner still has a remarkably low price tag.

Sure, it’s not as cheap as the Excursion or Seahawk. But compared to its competitors, you can save a LOT by going for the Mariner.

So who is this boat for?

Not for someone who wants the cheapest and easiest way to get on the water.

The Mariner 4 is for serious fishermen on a budget. It’s for anyone who wants a high-quality and durable dinghy without breaking the bank.

But how does it stack up against other professional inflatable boats?

We’ll get to that soon.

First, let’s have a look at…

What’s in The Box?

Intex won’t be Intex if there’s no stack of freebies in the box.

The Mariner 4 does NOT disappoint when it comes to this.

You get the usuals, plus a few extras:

However, these are longer than the typical 48-inch Intex oars. At 54 inches, rowing will be a breeze – you won’t have to huff and puff with short oars.

Normally, I don’t like Intex’s free inflatable seats. But the Mariner’s 3 inflatable thwart seats are an exception.

Unlike their counterparts, these seats are solid. They fit in snuggly and don’t move around – giving you a comfortable place to sit while rowing.

You also get Intex’s famous high-output air pump. This double-action pump inflates when you push AND pull – inflating your boat 2x faster.

Going fishing? The gear pouch is the perfect place to store your flies and lures. The Mariner also comes with a battery pouch – ensuring your marine battery doesn’t get wet.

Then there’s the emergency repair patch kit. You probably won’t need it (the Mariner is very tough), but it’s always good to be ready.

The carry bag is a bit disappointing. Unlike the other freebies, it’s poorly made. You’re better off using your own duffel bag to bring your boat along.

Finally, plastic flooring. The Mariner is the ONLY Intex boat to have solid flooring. This removes one of the BIGGEST problems with Intex boats: stability.

With the solid plastic flooring, you can stand in your boat without falling over. It makes your boat rigid and comfortable – giving you the best fishing trip possible.

Now for the meat of this review: features.

The Mariner 4 is packed with features you won’t find in any other Intex. So many, you can divide them into three categories

Let’s take a look at each one.

With the Mariner 4, you get

Almost all boats advertise themselves as using some form of “heavy-duty PVC”. The trick is, most of these only have one layer.

If that layer takes a heavy hit, it WILL puncture and start leaking immediately.

For a truly strong boat, you need more than just one.

That’s why the Mariner has not 1, not 2, but 3 layers of heavy-duty material. An inner mesh layer is sandwiched by two thick layers of PVC for maximum strength.

Think about it. Rocks have to get through 3 abrasion-resistant materials before any air gets out. If that’s not tough, I don’t know what is.

The Mariner 4 was designed to take hits from rocks. That’s why it has a thick rock-guard all around and underneath.

Even if you crash on rocks or scratch your bottom against them, you’ll have little to worry about.

I’m not saying it’s invincible. With rough use, you might get a puncture now and then. But that’s not too much of a problem.

The Mariner 4 has 4 separate air chambers. This way, if one gives, the other 3 will hold the boat afloat.

Talk about emergency preparedness. This gives you enough time to land safely and use your repair patch to fix it up.

Not a problem with the Mariner 4.

Its 19-inch tubes are so tall, you won’t have to worry about water getting in. Contrast this to other Intex boats – which are too short to stop waves filling up the boat.

There’s nothing too unique about Mariner 4’s convenience features.

Yet if you take away any of these, you’ll feel it. These convenience features all add up to give you the most care-free fishing trips.

If you’ve been with me for a while, you surely know about Boston valves already. They’re one of the best and fastest valves for inflation.

Want a place to put your rod? Put it in the rod holders!

Want a place to put your oars? Put it in the oar holders!

These two are staples of Intex inflatables – we almost take them for granted. But trust me, if they’re not there, you’ll have a hard time finding a good place for these.

The Mariner is not only the most durable Intex, but it’s also the best performing.

Check these features out:

The Mariner is the ONLY Intex boat with an inflatable keel.

The hull has a v-shape thanks to this – making it even more stable. Choppy waters won’t toss and turn your boat any way it will.

With this and your solid plastic flooring, you’ll have a boat that can stand up to any rough water.

Most Intex boats have oarlocks, but none of them are rotational. They’re just a piece of plastic with a hole.

The Mariner’s oarlocks, on the other hand, are fully rotational. When you insert the oars here, it’ll give you unparalleled rowing mobility.

Speaking of rowing, the Mariner’s shape was designed for rowing. Most Intex boats have either a U or kayak shape.

Instead, it uses a river raft shape.

This shape helps with balance. It also makes it more resistant to rock punctures (as if the 3 layered material and rock guard weren’t enough).

It’s easier to install a motor on a U-shaped boat. But the motor mount fittings on the stern of the Mariner take this problem away. With them, attaching a motor mount and trolling motor won’t be a problem.

The Mariner 4 is Intex’s best boat, sure…

… but how does it stack up against other brands?

To give you an idea, we’re putting the Mariner 4 head to head with a “pro” boat – the BRIS 8.2 air floor dinghy.

If you’re looking for a serious inflatable fishing boat, BRIS is one of the first brands you’ll turn to.

Their smallest, cheapest model (the 8.2 ft. dinghy) costs considerably more than the Mariner – up to 2x more in some stores.

How do they stack up?

As you can see, the Mariner doesn’t quite match up to BRIS boats.

The 1,1000 denier 0.9mm PVC with polyester support is much stronger than the Mariner’s 3 layers.

Plus, there’s a lot of features the BRIS has that trumps the Mariner.

Pricewise, the Mariner blows BRIS out of the water. But for what you get, it’s easy to see why many would choose BRIS.

You get a clear picture of who the Mariner was built for when you compare these. It’s not quite at the level of other pro boats, but it’s also remarkably cheaper.

Is the Mariner 4 worth it?

That all depends on you.

But if you’re looking for a solid inflatable that doesn’t break the bank… you’d be hard-pressed to find anything better than the Intex Mariner 4.