If you’re in the market for an inflatable boat, you’ve probably heard lots of seemingly interchangeable terms getting thrown around.

Specifically, you may have heard of inflatable boats and inflatable kayaks. Are they the same thing?

So what are some major differences between inflatable boats and inflatable kayaks?

What are the pros and cons of each type of inflatable?

And, most importantly, how do you know which type of boat is best for you?

In this article, we’ll answer all of these questions.

What’s the Difference Between Inflatable Kayaks and Other Inflatable Boats?

Actually, though, there are several differences between inflatable kayaks and other types of inflatable boats. The shape, size, and design of each boat is quite different from the other, and the materials used may also be different.

This long, narrow shape allows them to move quite easily and efficiently through the water. Inflatable kayaks, like regular kayaks, are typically paddled through the water using a double-sided paddle.

Most other types of inflatable boats are much wider than inflatable kayaks. They are often shaped like a large bullet–rounded to a blunt point on the front end, and more or less square at the back.

Because they are so wide, most inflatable boats can seat more people than inflatable kayaks, but this isn’t true across the board. Remember, the term “inflatable boat” refers to a broad range of sizes and styles of a boat.

Inflatable kayaks are generally smaller than other types of inflatable boats. This is because of their long, narrow shape.

Some inflatable dinghies are made for little more than using as a pool float in calm waters. These may be slightly wider than the average inflatable kayak, but will probably be shorter and will have a smaller weight capacity.

On the other hand, inflatable canoes will be similar in shape to inflatable kayaks but may be both wider and longer.

Some rigid inflatables also have a rigid transom, which makes it easy to mount a trolling motor. The rigid floor also adds stability, making it possible to stand up and change positions without causing the boat to rock too much.

Of course, if you’re in an inflatable kayak, chances are, you won’t need to stand up. As mentioned above, inflatable kayaks are often paddled with an oar, but some also have a foot-pedal mechanism so you can move through the water hands-free.

Pros and Cons of Choosing an Inflatable Kayak

So now that you’re familiar with the different types of inflatable boats and the differences between them, you may be wondering, what are the pros and cons of each type?

To start, let’s check out a few benefits and drawbacks of inflatable kayaks.

The sleek, streamlined shape of inflatable kayaks makes them fairly easy to paddle around. Their shape is ideal for moving through the water, so each paddle stroke gives you maximum efficiency.

Their small size also helps in this area. Inflatable kayaks are anything but bulky, so you don’t have a lot of extra weight or material to move around.

Inflatable kayaks will move smoothly down a river and cut like a knife through soft butter in calm waters.

Many inflatable kayaks fold up into a small, compact package when deflated. They are easily stowed away in a camping backpack or carrying bag, so you can take them along no matter where your adventures take you.

This makes inflatable kayaks an excellent boat choice for wilderness camping trips or times when you plan to move from place to place. It also makes them a great choice for an emergency boat.

3. Con: They Lack of Storage Space

Of course, the small size of inflatable kayaks counts against them when it comes to storage and weight capacity.

Some inflatable kayaks are specifically designed to provide extra storage space, but most of them are simply lacking in this respect. If you’re planning a long boating trip or are trying to haul all of your gear, an inflatable kayak may be insufficient.

If you buy an inflatable kayak, always pay attention to the weight capacity and get a good idea of the available storage space before you load it up for your first trip.

Pros and Cons of Choosing Another Type of Inflatable Boat

So, what are the pros and cons of other types of inflatable boats, and how do they compare with inflatable kayaks?

Glad you asked! Keep reading to find out more.

Because they are so diverse, it’s possible to find an inflatable boat for almost any use.

Whether you want a small dinghy to use as a pool float, a compact but tough little boat to pack in your camping supplies, or a larger boat for a fun day on the lake with friends, you can probably find an inflatable boat that will work for you.

Plus, the many different sizes allows you to choose one with the best weight capacity for you. Rigid inflatables are great for fishing and boating in the ocean, while air floor boats are perfect for a comfortable lake escapade with a friend or two.

Whatever you’re looking for in an inflatable boat, chances are, you’ll be able to find it if you spend a little time looking.

2. Pro: They Have Lots of Storage Space

Inflatable dinghies, in particular, have a wide surface area which provides plenty of room for all your gear. Rigid inflatables are generally able to support heavier gear because the floor won’t sag under the weight.

Wide, flat inflatable dinghies don’t move as easily through the water as inflatable kayaks do. They can be difficult to steer, and you’ll have to paddle harder and faster to get them to move quickly. In fact, with many inflatable boats, you’ll need a friend to help you paddle.

Of course, this problem can be easily overcome with the use of a trolling motor. But if you don’t have a trolling motor or don’t want to use one with your inflatable, then you can expect to get a workout every time you take it out in the water.

Which Type of Inflatable is Right for You?

If you typically take either solo or tandem trips, enjoy paddling, and like to explore rivers and tight spots, then an inflatable kayak might be the boat for you. Many inflatable kayaks are also good for fishing and camping, though they don’t offer a lot of storage space for your gear. 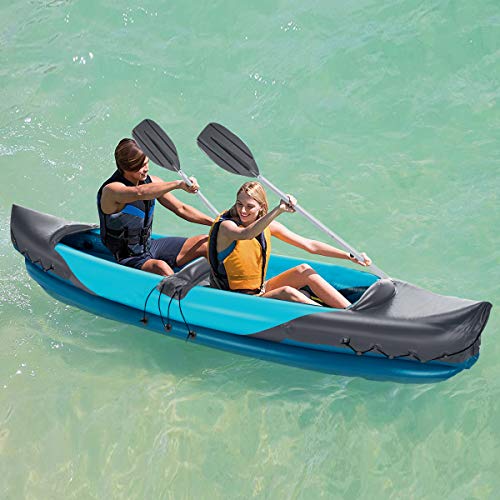 If you need a larger boat for fishing, exploring a bit offshore in the ocean, or handling the toughest water conditions, you’ll probably want to choose a heavy-duty rigid inflatable boat. These will give you adequate storage space and strength to handle rough conditions. 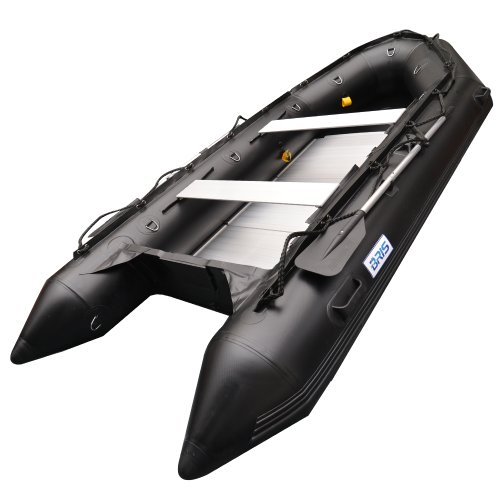 If you’re a recreational boater and just want something you can use to have fun with a few friends on calm days, then a large air floor inflatable should suit you well. These are great for having fun and handling calm waters, and they can sometimes hold up to five people. 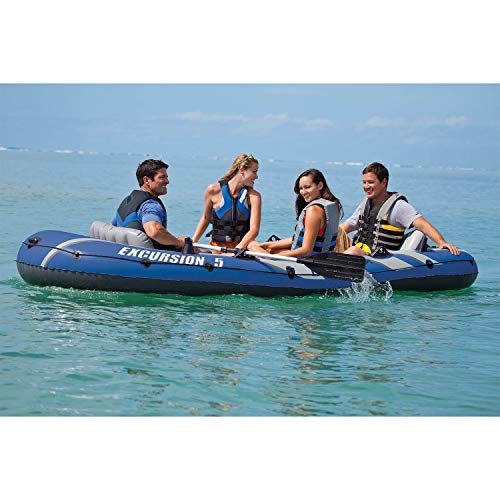 Inflatable boats are becoming more and more popular, and there are lots of different kinds that are ideal for different scenarios and conditions.

Inflatable kayaks are a specific type of inflatable boat that move swiftly and easily through the water, are easy to store and transport, and make for great camping or emergency boats.