There’s one BIG decision everyone buying a kayak has to make:

When you compare them side-by-side, you’ll realize that this is such a difficult decision.

Both have INCREDIBLE perks.

So how do you choose only one?

What features should you favor?

Which one will give you the best experience you can get?

This way, you’ll know which one is the best for YOU.

The 7 Key Differences Between Inflatable and Hard-Shell Kayaks

When you change the material of the kayak, everything changes.

Convenience, portability, buoyancy, maneuverability, price, and more… let’s have a look at the 7 KEY differences between inflatable and hard-shell kayaks.

1. Inflatable Kayaks Are a LOT Easier to Transport and Store

You can fold an inflatable kayak.

You don’t have to tie it up on the roof of your car anymore. All you have to do is stuff it up in your carry bag and you can bring it wherever you want.

If you’re hiking upstream, this will greatly lessen your load. They’re not only small and compact, but inflatable kayaks also weigh far less. 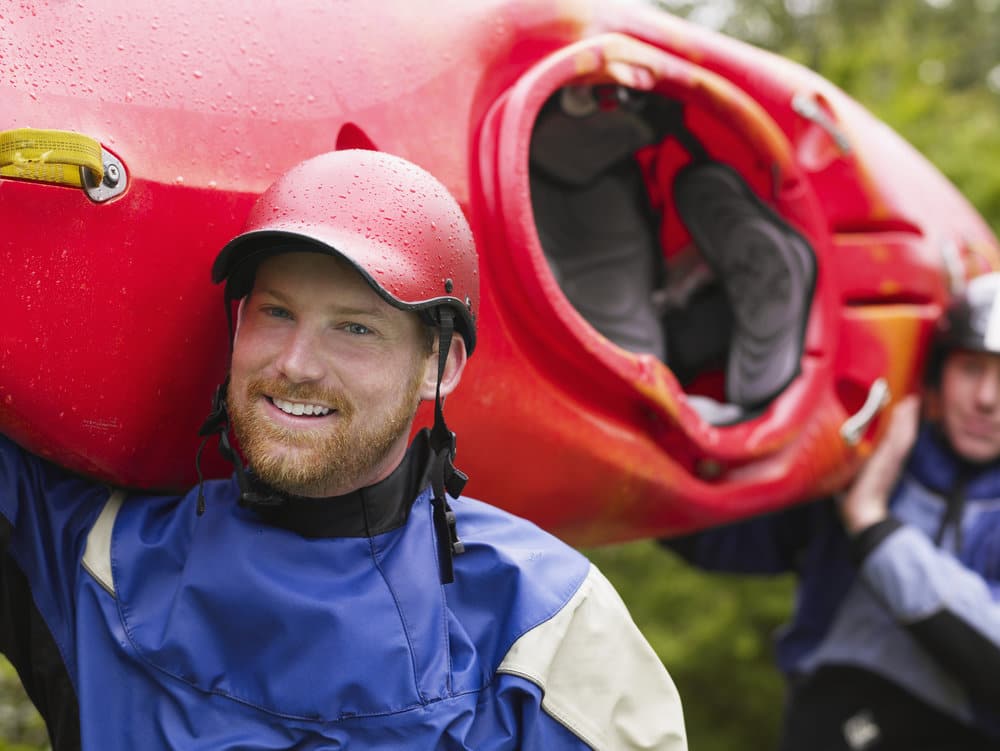 Lighten that load! It often takes 2 to bring a hard-shell kayak along

And when you get home, you don’t need a garage for it either.

You can literally keep them in a corner of your room.

They’ll be completely fine there – and won’t take up space!

2. Hard-Shells are Ready to Go! Inflatables Need Setting Up

Sure, having your kayak in a compact bag is convenient for bringing along.

But wait ‘til you get to the lake.

You’ll have to spend a good 10-15 minutes setting your kayak up.

You’ll have to spread it out, pump it up, and set up the seat before you can drag it to the water.

When you get to your destination, you can hop in and go! No need to set-up anymore. 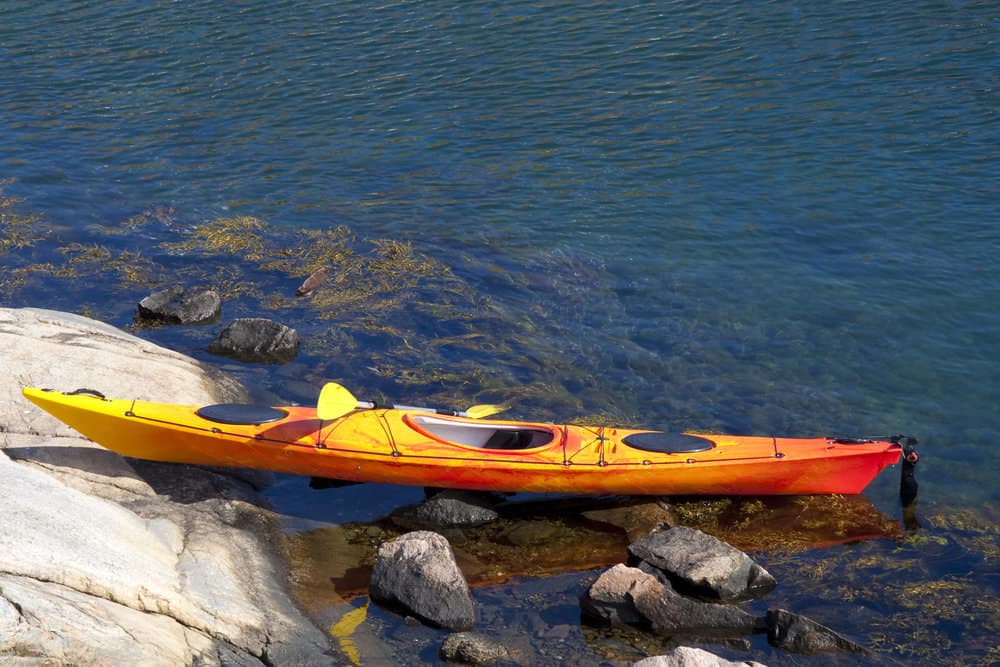 No setting-up is needed. Just hop in and go!

And it doesn’t stop there.

When you get back to shore, all you have to do is give your hard-shell a quick wipe-up and you can head right home.

With an inflatable, drying up can be tedious.

It’s much easier to dry solid materials than inflatable ones. You have to rub and rub and rub before the moisture is gone.

Plus, inflatable kayaks like the Advanced Elements AdvanceFrame Elite are wrapped in a layer of fabric. Drying in between the fabric and vinyl tubes is a headache.

The AdvanceFrame Elite is an outstanding kayak. The only problem is, it’s quite difficult to dry.

After a long day of rowing, spending time drying and folding isn’t the most exciting activity.

Kayaks are so narrow, you’ll feel like flipping over if you put too much weight on one side.

This isn’t a problem for experts, but it’s a real concern for first-timers. No one wants to capsize, ever.

It can be quite scary, and getting back in is difficult. Just check out this video on what to do if this happens:

Kayaking | How to Self-Rescue || REI

With their thick, buoyant tubes, tumbling over is the last thing you have to worry about. Even big waves won’t flip these over.

Compare this video with the video above. You’ll see how much harder inflatables are to flip over (and how much easier it is to get back in).

All the kayaks are hard-shelled.

Because hard-shell kayaks are built for performance.

Whether it’s a kayak sprint or whitewater freestyle, hard-shell kayaks are on the scene. They’re the fastest, most maneuverable solo rowboats in the world.

Their shape lets you cut through the water at tremendous speeds. It also allows for hairpin turns – perfect for avoiding rocks as you plunge downstream. 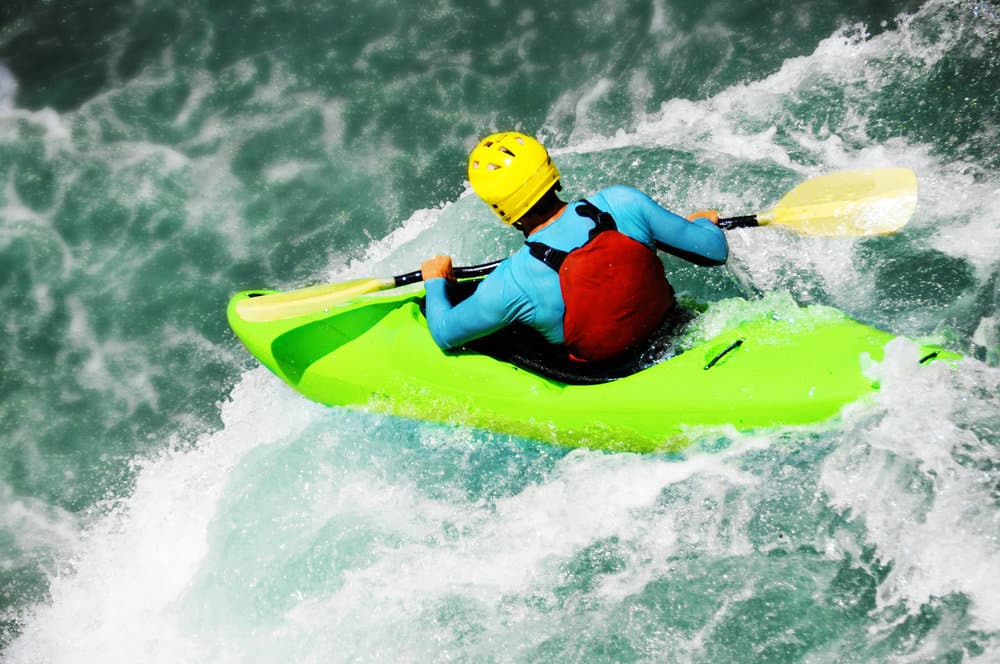 When things get extreme, hard-shells come out to play

Inflatable kayaks may have that extra stability, but this comes at a cost.

Their thick tube creates drag, making it impossible to slice through the water. This not only makes them slower but also more difficult to navigate – not something the pros want.

Plus, you can’t go on a straight line with inflatables. Every stroke will push you to one side (you’ll have to balance it out with a stroke on the other side).

Now, modern inflatable kayaks are finding ways to combat these problems. But as of today, only high-end drop-stitch kayaks (which are pretty expensive) come close to what hard-shells can do.

5. Inflatable Kayaks are Harder to Damage and Easier to Repair

Want to hear something surprising?

Inflatable kayaks are just as safe as hard-shell kayaks (maybe even safer!).

Sure, they’re not as fast or maneuverable as hard-shells. But when it comes to hitting rocks, I’d rather be in an inflatable than a hard shell.

Note: I’m talking about quality inflatable kayaks. Not cheapos (those puncture like crazy).

When a hard-shell smashes against a rock, it’s bound to crack. And boy will you be in trouble if that happens.

To make matters worse, hard-shell kayaks are much more difficult to repair.

Fixing an inflatable is as easy as using a patch with glue. With hard-shells, you’ll have to know a thing or two about chemistry.

And that’s only for plastic kayaks. Wood, fiberglass, and other kayak materials will all have different solutions.

Which brings us to…

6. You Have a Plethora of Options With Hard-Shells

The options are seemingly endless with hard-shell kayaks.

And they all have their own little perks. 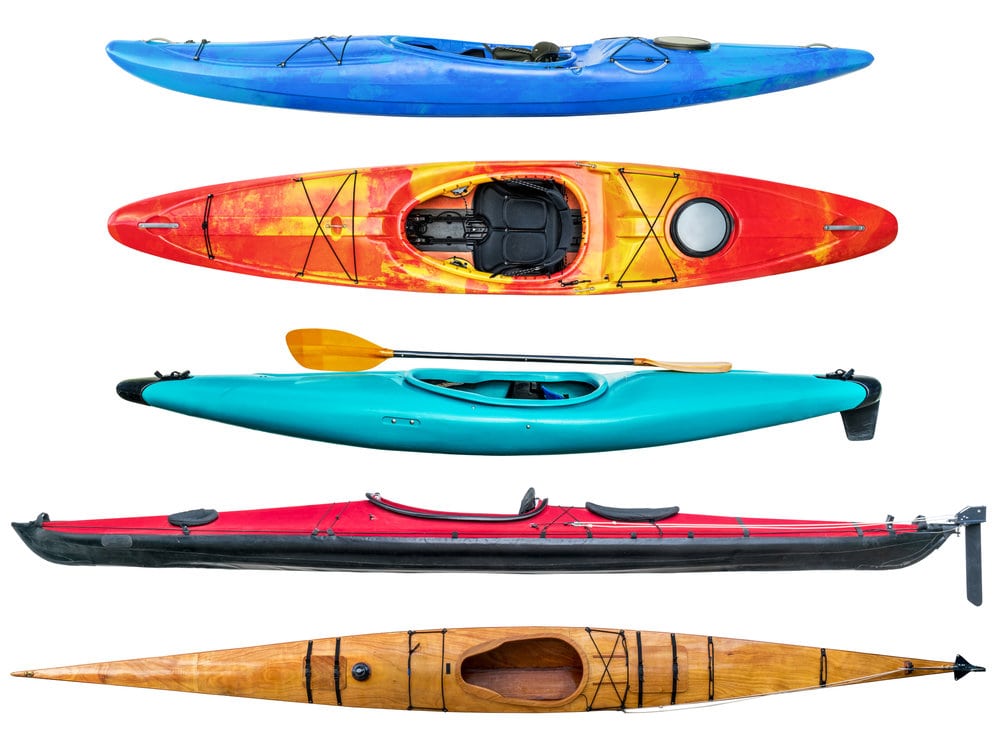 Compare that to inflatables, where you don’t get a lot of choices.

Sure, you can choose between PVC or Hypalon, and vinyl or fabric. But that’s about it.

Again, I should mention the new drop-stitch inflatable kayaks. Those are really changing the game.

Other than that though, there are very few differences between inflatable kayaks.

7. Inflatables Are Crazy Cheap (Except When They’re Not) 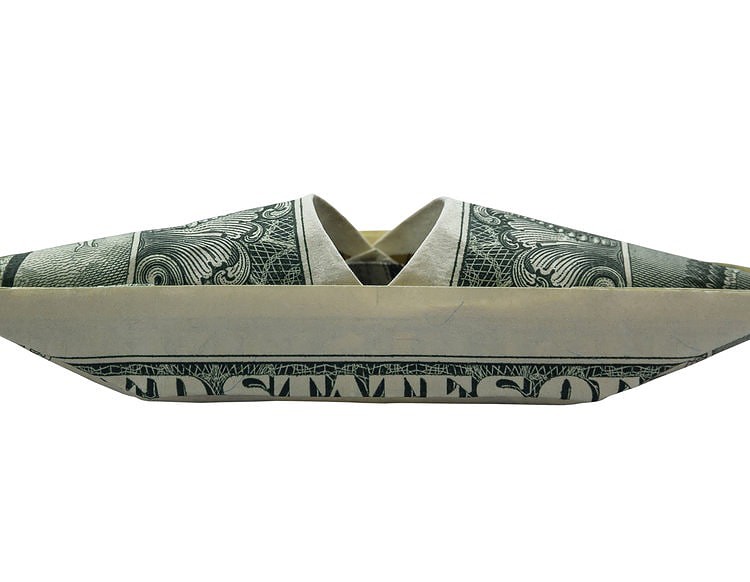 Another reason to love inflatables is their price tag.

And they’re not bad either.

Of course, you shouldn’t take them to whitewater rapids or the open sea – that’s a death wish. But for calm, tranquil lakes, they’re all you’ll ever need.

But when you compare the two side-by-side, you’ll see what I mean. You can save a LOT by going for inflatables.

Inflatable vs Hard-Shell Kayak: Which is Better?

With all that in mind, let’s get to the BIG question:

Which is better for YOU?

If you’re looking for a good time at calm lakes – get an inflatable kayak. They’re stable, cheap, and super convenient to bring along.

On the flip side, if you

If you’re looking for the most epic, adrenaline-pumping adventures – get a hard-shell kayak. You just can’t get the same level of performance from inflatables.

Now that you know the 7 key differences between these two, the choice should be easy.

But whatever you choose, one thing is for certain…

You’re going to have a BLAST on the water.

Have a question? Leave a comment and I’ll get back to you!